Drone and mobile phone footage from San Francisco has highlighted the scale of the city’s homeless problem, as wildfires forced officials to set up temporary indoor relief shelters.

In the first of two short clips uploaded to LiveLeak, a drone was flown over homeless encampments built near the City Hall in San Francisco, California.

The footage shows the scale of the problem, and gives a glimpse into a growing issue in the city, which is in direct view of those making the decisions for residents as they enter the City Hall and surrounding buildings.

Last week, it was announced that a law had been passed in San Francisco that will enable the city to collect $300m (£231.4m) from taxing wealthy businesses, which will go towards homeless services.

The city’s Proposition C will tax five per cent on San Francisco businesses that make more than $50m (£38.5m) a year, after it was finally made into law following a majority vote in 2018. 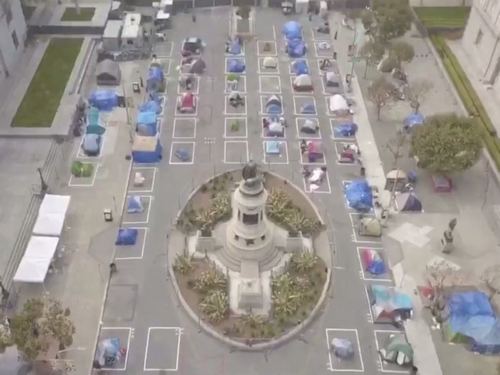 An article on the website of Our City Our Home, who campaigned for Prop C, explains that half of the funding “will pay for construction, rehab, prevention and operating subsidies of approximately 4,000 units of housing over the next eight years.”

The group says that the aim of the legislation “is to house all who are currently experiencing long term or chronic homelessness, are sick, are youth, and families with children.”

The rest of the money will be used to help those who experience mental health and substance abuse crises, and to aid people in the city who are housing insecure.

The second clip uploaded to LiveLeak again shows the scale of the city’s homeless population, but against the backdrop of the wildfires that have ravaged areas of California for the last month, polluting the air with toxic smoke.

In the video, filmed by Jenna Chan on her smartphone, the car that she is a passenger in drives by a series of homeless encampments located near Caltrain station, as wildfires rage nearby giving the sky an orange tint.

On 11 September, the air quality in the city hit a high of 228 on the Air Quality Index, which is classified as “very unhealthy,” according to Fox News.

In reaction to the toxic air polluting the city during the wildfires, the San Francisco Department of Emergency Management opened up four weather relief centres for homeless people, but only did so from between 10am to 5.30pm.

On Friday, the department released a statement, which read: “There will be a health screening at these sites before entering; face coverings & physical distance required as Covid-19 is still a threat in SF. Masks will be provided for those who do not have one.”

The wildfires, that have decimated parts of states on the US west coast, have forced at least 600,000 people to flee their homes, which may contribute to the worsening of an already growing homeless problem in San Francisco.