Lightning strikes sparked new wildfires in northern California on Sunday as the Golden State continued to grapple with a record-breaking heatwave.

The rare thunderstorm also exacerbated a huge forest fire that has already forced hundreds from their homes north of Los Angeles.

Some 4,500 buildings remain threatened by the blaze, which was burning towards thick, dry brush in the Angeles National Forest.

Meanwhile, a fire tornado – or “firenado” – was spotted near Chilcoot, which straddles the state border with Nevada, about 150 miles northeast of Sacramento.

Firefighters tackling the blaze near Angeles National Forest faced winds of up to 15mph as they attempted to bring the flames under control.

“We set up a containment line at the top of the hills so the fire doesn’t spill over to the other side and cause it to spread, but it was obviously difficult given the erratic wind and some other conditions,” said fire spokesman Jake Miller. 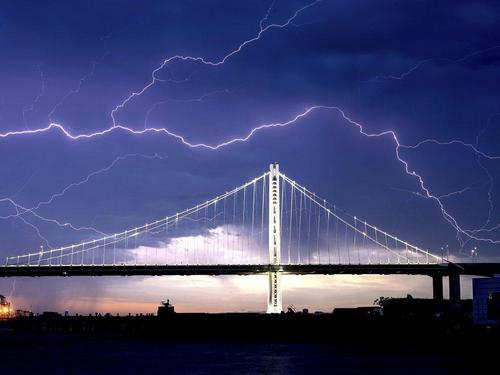 Multiple daily heat records were set on Saturday during a heatwave that has caused frequent blackouts across the state.

Unsettling weather triggered an unusual warning by the weather service of the fire-induced tornado at an out-of-control forest fire that broke out north of Lake Tahoe on Saturday afternoon.

The lake fire was just 12 per cent contained as of Sunday morning and has burnt nearly 28 square miles (72 square kilometres) of brush and trees. Fire officials said 33 buildings had been destroyed, including at least a dozen homes.

At one point, the fast-moving fire jumped onto a highway and came dangerously close to a fire truck. A fire crew from Truckee tweeted a video of firefighters dragging hoses as they ran alongside a moving truck that was dodging the flames.