Russia has announced the world’s first vaccine for Covid-19 amid concerns it may not have fully tested its product.

“One of my daughters did the inoculation herself,” he said before a cabinet meeting on Tuesday morning. “After the first injection, her temperature went up to 38, but by the next day it was just a little over 37.” 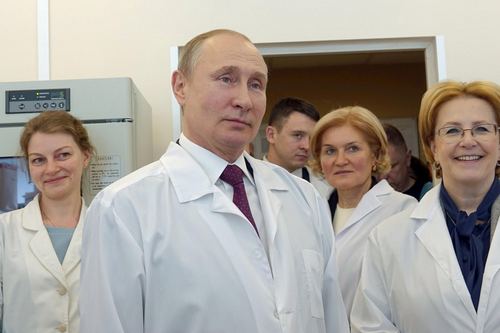 Russia has embraced the race to approve the world’s first vaccine, with Kirill Dmitriev, head of the country’s sovereign wealth fund, likening the search to the Soviet launch of the world’s first satellite in 1957.

Russia is one of two dozen countries involved in vaccine trials. In July, the United Kingdom accused Russia of hacking data from advanced trials at the University of Oxford – to the consternation of Moscow.

The Russian vaccine uses adapted strains of the adenovirus, a virus that usually causes the common cold, but researchers have failed to produce evidence of its safety or efficacy. Testing was carried out on soldiers and medical students, with regulatory approval arriving several months ahead of the scheduled completion of clinical trials.

That speed and lack of transparency has fuelled concerns that geopolitics may have been prioritised at the expense of science.

Mikhail Favorov, an epidemiologist at the US Centre for Disease Control and Prevention who sat on the board of the Gamaleya Institute between 1989-90 has suggested his former colleagues may be guilty of cutting corners to deliver the goods. Writing in a social media post, he revealed he asked for data about the adenovirus vaccine without success.

“I hope with my whole heart that the vaccine will be protective and safe,” he said. “We’ll know soon enough if the vaccinated don’t get ill with Covid-19, which will be great. If they do get ill, we’ll know it doesn’t work, which is bad. But if people start dying at a proportion of one in hundred or a thousand, then it will be especially bad, and for the developers who will face prison.”

At a congressional hearing last month, Anthony Fauci, the man leading the US coronavirus response effort also warned about the dangers of an under-tested vaccine.

“I do hope that the Chinese and the Russians are actually testing the vaccine before they are administering the vaccine to anyone,” he said. “Claims of having a vaccine ready to distribute before you do testing is problematic in the very least.”