At least two people have been wounded in a knife attack near the former Charlie Hebdo offices, Paris police said on Friday.

A police official said officers had arrested a suspect near the Bastille plaza in the centre of Paris, adding that the area has been cordoned off.

Rue Nicolas-Appert, the street in Paris’s 11th arrondissement on which the satirical magazine was formerly based, has been cordoned off, France’s Le Monde reports.

A blade was recovered from the scene, varying police sources have reported the weapon was a machete or meat cleaver. In addition, a suspicious package was found at the scene which police said was checked for explosives but none were found.

Paris police told the public to avoid the area and await further instructions. 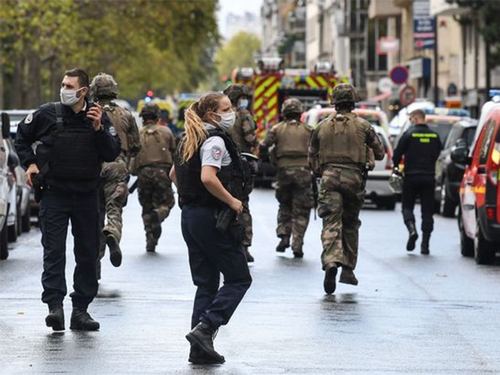 Thousands of children in nearby schools were locked down as a precaution while the Paris metro closed lines in the area, local media reports.

One witness told French radio station Europe 1: “I was in my office. I heard screams in the road. I looked out of the window and saw a woman who was lying on the floor and had taken a whack in the face from what was possibly a machete … I saw a second neighbour on the floor and I went to help.”

Jean Castex, France’s prime minister, said he “immediately” met with the country’s Minister for the Interior to “take stock of the situation”.

Police initially reported four people had been injured in the stabbings and two assailants were on the run but they have since revised the figures downwards with no explanation given.

France’s counter-terror police have opened an investigation into “attempted murder in relation with a terrorist enterprise”. It is not yet clear what motivated the attack.

The French satirical newspaper had republished controversial cartoons of the Prophet Muhammad to mark the start of a trial of suspected accomplices of terrorist gunmen who attacked its offices in January 2015.

Fourteen people are accused of obtaining weapons and providing logistical support for the 2015 Charlie Hebdo attacks, which left 17 people dead and dozens more injured. More than 140 witnesses are set to be called to give evidence in court.

The trial was due to start in March but was delayed until earlier this month by the coronavirus pandemic.