It is the first time that a commercial vessel sails across the Northern Sea Route in February. The voyage of the Christophe de Margerie from Jiangsu in China to the remote Arctic terminal of Sabetta was made in the Arctic winter dark and through thick sea-ice.

Glimpses of the voyage are now put on display by shipping company Sovcomflot and its partner Rosatom.

As previously reported by the Barents Observer, the 299 meters long LNG carrier operated by Sovcomflot set out from the Chinese port on 27 Jan. and a few days later sailed through the Bering Strait where it soon teamed up with nuclear icebreaker 50 Let Pobedy.

The two ships subsequently sailed together across the vast Arctic route to the Yamal Peninsula. On 19 Feb. the powerful LNG carrier entered the port of Sabetta. That is two days after the original schedule. 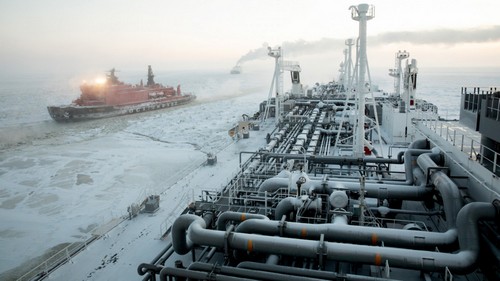 According to shipping company Sovcomflot, the voyage shows that navigation across the eastern sector of the Russian Arctic can be significantly extended.

“The current voyage of Christophe de Margerie significantly expands the navigation window in the eastern sector of the Russian Arctic and confirms that year-round safe navigation is possible along the entire length of the Northern Sea Route,” says company President and CEO Igor Tonkovidov.

The voyage proceeded through thick ice. The straits between the mainland and archipelagos Severnaya Zemlya and New Siberian Islands are covered by thick fast ice, while the remaining part of the area has one-year-old sea-ice.

However, there is no multi-year old ice in the area.

According to Sergey Gen, the captain of the Christophe de Margerie, the ice conditions were the toughest in the Chukchi Sea and the East Siberian Sea, where the vessel faced severe ice pressure and ice hummocks.

Through this area, the carrier had to sail astern, Captain Gen said in a comment. According to Sovcomflot the Christophe de Margerie has sailed astern for about 10 percent of the time sailed on the Northern Sea Route so far.

The Arctic is warming significantly faster than current climate models account for, fueling extreme heat and the abrupt disappearance of sea ice across the region, a new study by the University of Copenhagen has said.

“We have been clearly underestimating the rate of temperature increases in the atmosphere nearest to the sea level,” said University of Copenhagen professor Jens Hesselbjerg Christensen, one of the study’s researchers. 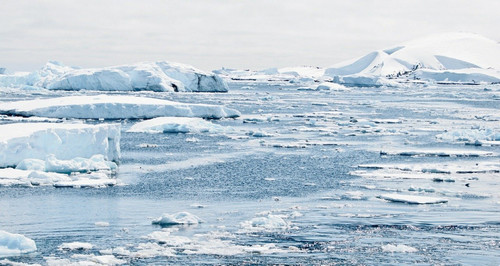 That increase, he said, “has ultimately caused sea ice to disappear faster than we had anticipated.”

Arctic sea ice recovery slowed to record levels in 2019 – the second-hottest year on Earth – after bottoming out that summer, according to research.

Previous studies have said that the Arctic has warmed by 0.75 degrees Celsius in the past decade. Those studies predicted the total disappearance of ice in the Arctic Ocean within 20 years.

“Changes are occurring so rapidly during the summer months that sea ice is likely to disappear faster than most climate models have ever predicted,” Christensen said in the latest study.

Russia is warming 2.5 times faster than the rest of the world due to its vast Arctic territories.

The Russian Arctic set “fantastical” heat records in June due to climate change, with abnormal tundra fires and rapid permafrost melt seen across the region, the head of Russia’s weather service has said.