After six years of an uneasy and at times violent truce, the specter of a new war is looming large in Russia-Ukraine relations. In retaliation for Kiev’s recent crackdown on pro-Russian media and politicians, Moscow is staging a large-scale and ostentatious military buildup along the Ukrainian border.

The situation is especially volatile in Donbass, where the ceasefire between the Ukrainian army and Moscow-sponsored breakaway territories has effectively broken down. Both sides accuse each other of provocations and regularly exchange fire, with the casualties mounting among both military personnel and civilians.

Amid this grim reality, the two countries’ claims that they are doing everything they can to avoid a war ring hollow. Yet their protestations may not be entirely untrue. Although both Kiev and Moscow are eager to reap the benefits of the sudden escalation, a rational assessment of the potential risks should ensure they stop short of a full-fledged military confrontation.

Tensions started to rise a couple of months ago, when Kiev’s growing frustration with Moscow’s intransigence in the Donbass talks overlapped with the weakening of Ukrainian President Volodymyr Zelensky’s position at home. Lacking prior political and diplomatic experience, Zelensky initially hoped that his goodwill and candor would suffice to settle the bloody conflict in Donbass. His unprecedented electoral triumphs in 2019 were in no small measure based on his sincere promise to bring peace to Ukraine.

In reality, however, the negotiating process proved much more difficult. The Kremlin agreed to meet Zelensky halfway on certain issues, such as imposing a lasting ceasefire in Donbass and establishing a direct communications channel between the deputy heads of the presidential administrations. 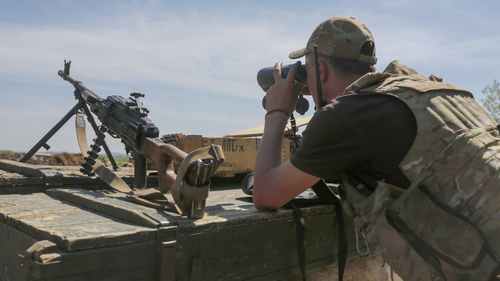 But it refused to amend the Minsk agreements aimed at resolving the conflict, and insisted on the full implementation of their political points. For Zelensky this was a non-starter: the major concessions to Russia required by the Minsk agreements were sure to provoke a backlash in the Ukrainian nationalist opposition, which could have cost him the presidency.

At the beginning of 2021, he ranked just a few points ahead of his leading opponents in the opinion polls, while his party, Servant of the People, had dropped to second place.

There are still about three years before Zelensky is up for reelection, but that means little in the fluid world of Ukrainian politics. Notorious for its opportunism, the Ukrainian political class is ready to switch its loyalties as soon as the leader’s grip on power falters.

The fall in public support for Zelensky immediately sparked talk of early elections, while leaders of opposition parties lined up to offer their services as coalition partners and potential prime ministers. Zelensky was in danger of being sidelined and forgotten just two years into his presidency.

The Ukrainian leader fought back. With the pandemic and IMF requirements leaving him with little room for maneuver on the economic front, Zelensky opted to bolster his legitimacy by mobilizing support in the West. In February he closed down several pro-Russian media outlets and slapped sanctions on the notorious oligarch Viktor Medvedchuk, believed to be a personal friend of Russian President Vladimir Putin.

The move allowed Zelensky to outflank the nationalist opposition at home and bid for a role in containing Russia abroad.

Other bold steps soon followed. Zelensky distanced himself from Ukraine’s oligarchs through high-profile arrests and new investigations, reaffirming his determination to carry out pro-Western reforms. He announced the formation of the “Crimean platform,” which is supposed to keep international attention on the fate of the peninsula.

The Ukrainian president also presented the country’s new security strategy, which reiterates the aspiration to join NATO and puts the main focus on countering Russian aggression. In addition, Ukraine has hardened its stance in the Donbass talks, striving to underline that it is conducting negotiations with Russia, not the separatist republics.

This barrage of orders and decrees has produced mixed results. Zelensky has boosted his patriotic credentials at home, but is still deemed overly conciliatory by a significant proportion of Ukrainian nationalists, who are staging fierce street protests against him. His anti-oligarch crusade is based on shaky legal grounds, and risks further undermining the rule of law in the country.

The president’s newly found anti-Russian radicalism has brought Ukraine back to the West’s attention and ensured that Zelensky’s first phone call with new U.S. President Joe Biden happened sooner rather than later. But it has also landed him with a massive Russian military buildup along the border. Western leaders’ support for Ukraine is vocal, but largely rhetorical.

There is little doubt that Moscow anticipated Zelensky’s switch from peacemaking to confrontation. By the end of last year, there was no longer much hope in the Kremlin that the maverick Ukrainian president could indeed implement the Minsk agreements. Moscow also expected that Biden’s arrival in the White House with his Russia containment agenda would result in a more assertive stance by Kiev.

Accordingly, the Kremlin was well prepared to up the military ante in response to Zelensky’s attempts to boost his domestic and international standing by playing the anti-Russian card.

With Moscow massing its troops on Ukraine’s eastern border and in Crimea, Kiev has little chance of standing its ground if the standoff deteriorates into a military confrontation. Yet there are reasons to believe that neither side intends to unleash a war.

From Ukraine’s standpoint, an offensive in Donbas would likely give Russia a pretext to intervene in the region: Russian officials have repeatedly stated the country’s readiness to protect the self-proclaimed republics. The ensuing losses would ruin Zelensky’s already limited public support, while prompt assistance for Ukraine from the West is by no means guaranteed.

For Russia, the benefits of going to war with Ukraine are also dubious. Defying the Kremlin’s expectations, the Ukrainian state did not collapse when faced with a far more dire situation in 2014.

It is even less likely to do so now. In addition, public opinion polls show clearly that Russian society has grown tired of foreign policy adventurism and will not welcome a new military foray into Ukraine on the eve of the parliamentary elections scheduled for September.

Furthermore, the idea of capturing a land bridge to connect Crimea with mainland Russia is outdated. Since 2014, Moscow has invested billions of dollars in various infrastructure projects ranging from railways to electricity grids to meet the peninsula’s needs without a land connection. Crimea still suffers from water shortages, but that has been a problem for years, and hardly warrants a war to solve it.

The leaders of the separatist republics would love to extend their borders. The so-called “restoration of the territorial integrity” of Donbass (meaning pre-2014 administrative borders) remains an important part of their rhetoric, and could boost the local economy. But they are too tightly controlled by Moscow to go rogue, while their concerns are too parochial to impact the Kremlin’s calculus.

It’s highly implausible that the Russian leadership would risk the completion of its grand project, the Nord Stream 2 pipeline, for the sake of a questionable popularity boost at home, let alone in the Donbass republics.

The purpose of the current military buildup, therefore, is limited to demonstrating to Kiev and Washington that Russia is prepared to respond with force to any military attempts to change the status quo in Donbass. The ostentation with which the troops are being moved confirms that Russia is saber-rattling rather than contemplating a blitzkrieg.

Still, the absence of rational motives for a war does not preclude the crisis spiraling out of control accidentally. The tense atmosphere and casualties suffered by both sides increase the possibility that a misstep or rogue action at a local level could drag the two countries into a new military confrontation. A lack of restraint could invalidate all rational calculations: once unleashed, wars provide ample reasons to keep fighting.