Armenia has told civilians living in the Nagorno-Karabakh region to take shelter after Azerbaijan launched a bombing attack on the disputed region in the early hours of Sunday morning.

At least one Azerbaijani helicopter and multiple drones were downed by Armenian military, according to the country’s Defence Ministry, which said the ambush began at GMT 4.10am against civilian settlements, including the regional capital of Stepanakert.

All crew members of the shot down helicopter survived, according to Armenian military officials.

“Our response will be proportionate and the military-political leadership of Azerbaijan bears full responsibility for the situation”, the Armenian Defence Ministry said in a statement.

Azerbaijan’s Defence Ministry, in response, said it had launched a military operation along the “contact line,” a heavily-mined no-man’s-land that separates the Armenian-backed forces from Azeri troops in the region, Russian news agencies reported.

The two former Soviet countries have been in conflict for almost three decades over Azerbaijan’s breakaway, mainly the ethnic-Armenian region of Nagorno-Karabakh, and border clashes have intensified in recent months. 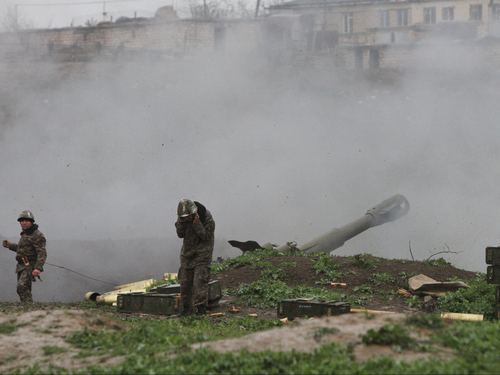 Armenia’s Foreign Ministry condemned the “aggression of the military-political leadership of Azerbaijan” and said the Armenian side would deliver an apt military and political response.

Azerbaijan’s Ministry of Defence posted on its official website, at GMT 9.10am on Sunday morning, to say: “Our troops have launched a counter-offensive along the entire front.” The post continued:

“In order to prevent the combat activity of the Armenian armed forces and ensure the security of the civilian population, the command of the Azerbaijani Army has decided to launch a counter-offensive along the entire front.

“Our personnel and tank units, with the support of missile and artillery units, frontline aircraft and unmanned aerial vehicles, detect and destroy a large number of Armenian forces, military facilities and military equipment located on the front line and in the depths of defense.

“According to the information received, 12 OSA anti-aircraft missile systems of the Armenian air defense units were destroyed in different directions. A combat helicopter of the Azerbaijani Air Force was shot down in the direction of Tartar, the crew members are alive.

“The rapid counter-offensive of our troops continues.”

The conflict comes after an August report by The Independent  which revealed that both regions were engaged in a deadly arms race, with each publicly admitting to purchasing £39m-a-piece Russian Su-30SM fighter jets.

Artak Beglaryan, a human rights Ombudsman in the Nagorno-Karabakh region, tweeted about the attack, citing multiple deaths and injuries. “A woman and child were killed,” Mr Beglaryan wrote, before adding: “Some schools have also been targeted. There are other civilian casualties too.”

Armenia and Azerbaijan’s seemingly intractable conflict is rooted in century-old Communist social-engineering schemes. The ethnic and nationalistic tensions spilled over into all-out war (1992-1994) between the newly independent states over the Nagorno-Karabakh enclave – a landlocked 1,700-square-mile piece of territory controlled by Armenia, with a population of 3 million, but surrounded and claimed by Azerbaijan, a nation of 9 million people.

There has been sporadic fighting over the enclave for decades. A war in 2016 led to more than 100 deaths, mostly military personnel but some civilians. Each side accused the other of sparking the fighting. Armenia launched mortars and rockets. Azerbaijan dispatched fighter jets and tanks. Each side dispatched drones. Russia quickly brokered a ceasefire, and the fighting ended in days.

The 30-year conflict between the two nations was first waged with small arms and rusting Soviet-era mortars. But thanks to years of arms purchases, both countries now have formidable arsenals of modern tanks, howitzer artillery cannons, unmanned drones and sophisticated anti-aircraft units – making any confrontation far more potentially catastrophic.

Ethnic Armenians in Nagorno-Karabakh declared independence during a conflict that broke out as the Soviet Union collapsed in 1991.

Though a ceasefire was agreed in 1994, Azerbaijan and Armenia frequently accuse each other of attacks around Nagorno-Karabakh and along the separate Azeri-Armenian frontier. Biden Called Putin a Killer. Will That Change Anything?