Denis Bondarenko is waiting in the snow in a long snaking queue of around 150 people outside the Foreign Citizen Temporary Detention Center in the small village of Sakharovo, 80 kilometers outside Moscow.

The 27-year-old lawyer is clutching a parcel of food and warm winter clothes for his cousin Ivan, a carer at a Moscow children’s hospice who was taken to the center in the early hours of Wednesday morning after leaving work and being arrested by riot police during protests over the jailing of Kremlin critic Alexei Navalny.

“I’ve been here for five hours and I’m the ninetieth person in the queue,” Bondarenko said. “I think they’ll let me through in about four hours.”

Local media are reporting that the Russian capital’s jails are overflowing after around 3,000 arrests in the city at demonstrations in support of Navalny, who was sentenced Tuesday to two years and eight months in a penal colony on charges his supporters say are politically motivated. As a result, over 800 detainees have been shipped out to Sakharovo this week, according to the head of the facility.

With Moscow’s jail cells filling up rapidly, Kremlin spokesman Dmitry Peskov defended the crackdown Thursday as “police measures against those who break the law.”

Meanwhile, friends and relatives of the detainees traveled out to the Sakharovo facility, which usually houses migration lawbreakers and illegal immigrants, to hand over care packages to their loved ones.

With around 1000 detainees given short jail sentences, ranging from a few days to a month after protests since Navalny was arrested on his return to Russia, Muscovites looking for detained friends and relatives have banded together in hastily assembled support groups.

On Telegram, a popular messaging app, groups dedicated to tracking down and providing support for detainees at the Sakharovo facility have attracted thousands of members.

When the center reached its full 966-person capacity Thursday, separate Telegram chats for each cell sprang up, as friends and relatives coordinated supply trips to the isolated facility.

Outside the migration complex, the assembled visitors waited for hours outside the security checkpoint amid steady snowfall with bags full of food, warm clothing and toiletries.

One by one, they were invited inside.

Most had been waiting since early in the morning, having been told by the migration center authorities that they would all be admitted by the end of the day.

At one point, a police van drove up to the facility’s entrance, in a move visitors interpreted as a warning against any potential disorder.

For Bondarenko the trek out to Sakharovo was the result of an unfortunate coincidence.

His cousin Ivan, who works for the Lighthouse children’s hospice near the epicenter of Tuesday night’s pro-Navalny demonstrations, had finished a late shift and was arrested as he stopped to ask police which metro stations were closed. The incident has been widely reported in Russian media.

“He’s completely non-political,” said Bondarenko. “We tried to tell the court what had happened, but they weren’t interested. The hearing lasted five minutes.”

Footage from inside the Sakharovo detention center filmed by inmates who have managed to smuggle mobile phones past guards circulated on social media shows detainees in overcrowded cells, lying without mattresses on metal beds and provided with only a single, open hole in the floor for a toilet.

Among the detainees is Sergei Smirnov, the editor-in-chief of the Mediazona independent news site.

Having been sentenced to 25 days’ detention for inciting illegal protests after retweeting a joke that included the time and place of the Jan. 23 demonstration, Smirnov has been pictured as one of 28 people packed into a cell designed for eight.

Darya, an inmate arrested with her husband on Tuesday night and sentenced to 15 days before spending her first night of her sentence in an unheated police bus, described the conditions inside the migration center as “awful.”

“Everything is filthy, it stinks and they won’t let us go outside our cell for fresh air,” she told The Moscow Times via Telegram.

Though relatives have been able to deliver food parcels to Darya and her cellmates, she said they had not been fed by the authorities since 6 a.m. on Wednesday.

“We had some snacks, but now our food is totally gone. And there’s no water.” 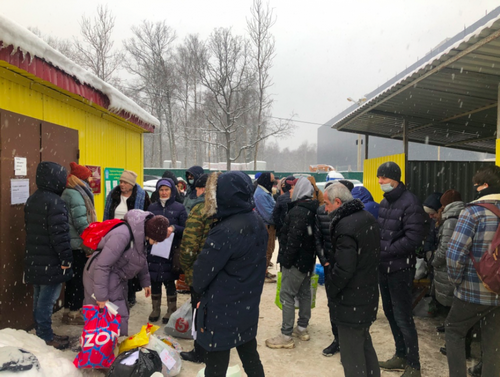 Sakharovo is 80 kilometers outside Moscow.

For some of the more fortunate detainees, their sentences were ending on Thursday.

Oleg, 57, who said he was one of the “liquidators” sent in to clear up after the 1986 Chernobyl nuclear disaster and declined to give his last name, was waiting outside the center for his 24-year-old-daughter Tanya, due to be released after being arrested at the Jan. 31 protest and sentenced to four days’ detention.

Having traveled to Sakharovo to pass his daughter a food package every day since her arrest, he was preparing to help her recover from her ordeal.

“When she gets out, I’m going to take her straight home and I won’t ask about anything that happened inside,” he said.

“She’s just a child. All of them are just children.”