US and world officials have welcomed a landmark diplomatic and economic agreement between Israel and the United Arab Emirates, while opponents and Palestinian officials – excluded from negotiations over White House “peace” plans in January – have condemned the plan, arguing that it normalises occupation of Palestinian territories.

The plan would suspend Israel’s annexation of occupied West Bank territories to instead focus on “expanding ties with other countries in the Arab and Muslim world”.

Delegations from the countries will meet in the coming weeks to sign bilateral agreements on tourism, air travel, security, telecommunications, energy, healthcare, and the establishment of embassies in each other’s nations, according to the agreement.

Israeli Prime Minister Benjamin Netanyahu has announced that Donald Trump’s plan has ushered in a “new era” for the region.

Asked on Thursday whether he supports a two-state solution with Israel and Palestine, the prime minister said he is committed to the White House plan, insisting that the suspension of annexation plans is merely on a “temporary hold” to solidify ties with the UAE. 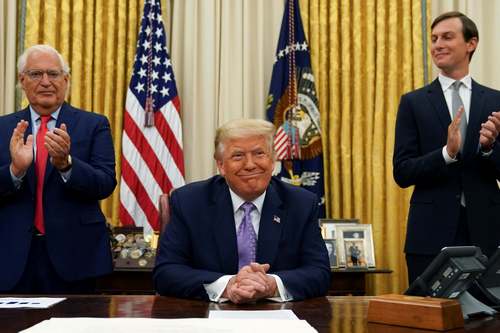 UAE officials have argued that its support for the agreement has largely hinged on preventing Israeli annexation and threats to a two-state solution.

Yousef Al Otaiba, UAE ambassador to the US, wrote a striking column in an Israeli newspaper in June that warned a “unilateral and illegal seizure of Palestinian land defies the international consensus on the Palestinian right to self-determination, will ignite violence and send shock waves around the region.”

In a statement following Thursday’s agreement, he declared it “a win for diplomacy and for the region” and “a significant advance in Arab-Israeli relations that lowers tensions and creates new energy for positive change.”

“It maintains the viability of a two-state solution as endorsed by the Arab League and international community,” he added. “It creates new dynamics and possibilities in the peace process.”

Palestinian officials have denounced the move and the normalisation of diplomatic ties with Israel.

“Israel got rewarded for not declaring openly what it’s been doing to Palestine illegally and persistently since the beginning of the occupation,” Palestinian leader Hanan Ashrawi said on Twitter. “The UAE has come out in the open on its secret dealings/normalisation with Israel. Please don’t do us a favour. We are nobody’s fig leaf!”

Palestine TV has reported that Palestinian President Mahmoud Abbas has called an emergency meeting among officials.

“The declaration of normalisation between Israel and the UAE is a free reward for the occupation for its crimes and violations against the Palestinian people,” said Hamas spokesman Fawzi Barhoum. “The normalisation is a stabbing in the back of our people.”

US Secretary of State Mike Pompeo said he hopes the agreement is the “first in a series” that “ends 72 years of hostilities in the region.”

“Although the peace treaties between Israel and Egypt and Jordan have not yet fulfilled their full potential, since the 1978 Camp David Accords and the 1994 Wadi Arava Agreement, we have witnessed significant economic development in Egypt and Jordan, an unmistakable dividend of peace,” he said in a statement.

United Nations Secretary-General Antonio Guterres said the organisation is open to “any initiative that can promote peace and security in the Middle East region,” according to a spokesperson.

“It was my profound hope that annexation did not go ahead in the West Bank and today’s agreement to suspend those plans is a welcome step on the road to a more peaceful Middle East,” he said.

Joe Biden, the president’s Democratic rival, has criticised administration efforts to move the US embassy from Tel Aviv to Jerusalem, which critics have argued undermines Palestinian territory. But the former vice president has said he would be reluctant to move it back, if elected.

On Thursday, he said that the “UAE’s offer to publicly recognise the state of Israel is a welcome, brave and badly needed act of statesmanship.”

“Annexation would be a body blow to the cause of peace, which is why I would oppose it now and would oppose it as president,” he added. “It would virtually end any chance of a two-state solution that would secure Israel’s future as a Jewish and democratic state and uphold the right of Palestinians to a state of their own.”

He said his administration would “build” on the White House plan, if elected.

Michigan Democrat Rashida Tlaib, one of two Muslim women and the first woman of Palestinian descent in Congress, said: “We won’t be fooled by another Trump/Netanyahu deal. We won’t celebrate Netanyahu for not stealing land he already controls in exchange for a sweetheart business deal. The heart of the issue has never been planned, formal annexation, but ongoing, devastating apartheid.”

“This Trump/Netanyahu deal will not alleviate Palestinian suffering – it will further normalise it,” she added.