Belarusian President Alexander Lukashenko on Monday discussed plans for a referendum on constitutional reforms as discontent with his 26-year rule has fuelled huge protests.

The 66-year-old is facing his greatest challenge yet following three weekends of giant protests in Minsk over a disputed August 9 presidential poll where he claimed victory over a popular opposition candidate, Svetlana Tikhanovskaya.

Lukashenko has twice before held such referendums, pushing through changes that strengthened the role of the president.

On Monday, he acknowledged the country’s “somewhat authoritarian system.”

Russia has backed constitutional reforms in neighbor and close ally Belarus after President Vladimir Putin in July pushed through reforms allowing him to serve more terms. 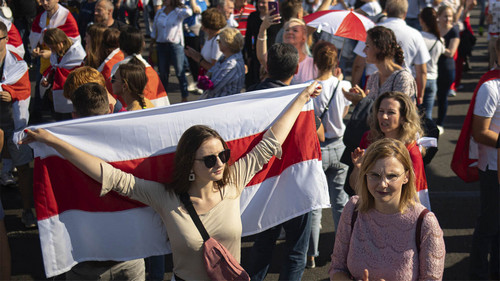 Lukashenko’s proposals on Monday focused on court reforms and rejected calls by the opposition to go back to the country’s 1994 constitution that was later modified to give the president more powers.

Lukashenko has sought to downplay the protest movement and depict himself as maintaining control and order.

But he has appeared increasingly isolated and paranoid, booed by the blue-collar workers he viewed as his natural supporters and wearing a bullet-proof vest to helicopter into his official residence.

Meeting the chairman of the Supreme Court, Lukashenko said that experts were discussing changes, including more independent courts, while he said this was not needed.

“I’m ready to argue with anyone that the most independent court is in Belarus. No one should laugh.”

He said however the system needed to work “without being tied to a personality, including Lukashenko.”

He said members of the public would be able to “give their opinion: what they like, what they don’t,” while insisting that “those who yell about being for changes” were a minority.

Lukashenko, elected democratically in 1994, held a referendum on changes including constitutional reforms in 1996.

These included giving the president greater powers on appointing judges including the chair of the Constitutional Court.

A controversial constitutional referendum was held in 2004 allowing the president to serve three terms instead of two as before.

Lukashenko said that going back to the 1994 Constitution as the opposition wants would not move the country forward. Biden economic plan to focus 1st on infrastructure this week