At a small-town campaign rally held by the rising star of Belarus’s political opposition, Elena stood among the unusually large crowd, wrapped in a red and white flag – the colors of the ex-Soviet country’s emboldened opposition.

Like many others at the gathering for opposition candidate Svetlana Tikhanovskaya, she preferred to give her first name only, for fear of drawing unwanted attention from the authorities.

“I want to have freedom of expression. To go out on the street and speak freely and not be afraid anymore,” the 42-year-old bread factory worker told AFP.

Several thousand people filled a small stadium in Maladzechna, a city of some 100,000 people northwest of the capital Minsk, to listen to Tikhanovskaya – who has emerged as the leading opponent to strongman Alexander Lukashenko.

The crowd, packed with young people born after the 1991 collapse of the Soviet Union and with no memory of the pre-Lukashenko era, waved flags and chanted “change” as 37-year-old Tikhanovskaya took to the stage in late July.

“Now is the time when everyone must overcome their fear,” she said. 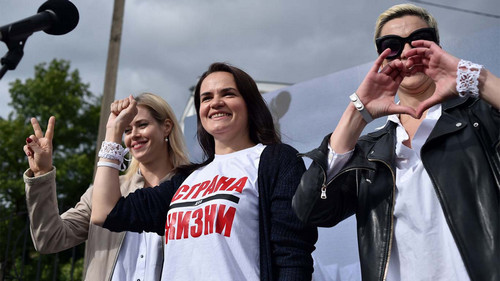 “Do you think I’m not scared? I’m scared every day. But I muster my courage, get over my fear and go to you and go for victory.”

The stay-at-home mother launched her presidential bid after her husband and popular blogger Sergei Tikhanovsky was arrested and barred from challenging Lukashenko in the Aug. 9 polls.

Their five-year-old daughter and 10-year-old son have been taken abroad for their own safety.

His fear is well-founded. According to the Viasna rights group, at least 1,100 people have been arrested since May during pre-election rallies.

Despite the crackdown, Tikhanovskaya was allowed to run in her husband’s place, and her bid to remove 65-year-old Lukashenko has galvanized his opponents.

Tikhanovskaya has drawn massive crowds at her rallies throughout the country where she is accompanied by Maria Kolesnikova, Babaryko’s campaign director, and Veronika Tsepkalo, the wife of the self-exiled opponent.

“What is important is that this is happening not only in the capital but also in small towns and villages,” said Alesia Rudnik, a Belarussian political analyst.

Rudnik added that the trio of women are bringing together Belarussians who would not normally participate in anti-government demonstrations.

#Belarus.Up to 20k people gathered in support of Sviatlana #Tsikhanouskaya in #Brest. It’s the largest political rally in history of this city and the 2nd largest after #Minsk that Tsikhanouskaya held in recent weeks. Watch how people were singing “I want changes!”by Viktor Tsoi pic.twitter.com/rWVz9WW44V

The day after the rally in Maladzechna, a large crowd gathered to see the women in Grodno, a city in northwest Belarus.

Some 10,000 residents of Gomel in the southeast of Minsk came out to hear Tikhanovskaya speak in her husband’s hometown.

The open-air rally went long into the evening with bands playing and the crowd lit by cell phone flashlights.

The largest rally drew an estimated crowd of 63,000 in Minsk’s People’s Friendship Park on July 30 – despite concerns over reprisals after the authorities arrested 33 Russian “militants” supposedly planning mass riots with the opposition.

“Tikhanovskaya is a symbol of the moment, that of the protest vote against Lukashenko. She has attracted everyone who does not want Lukashenko,” political scientist Valery Karbalevich said.

Observers say Tikhanovskaya has leveraged widespread discontent with Lukashenko, who has been nicknamed “Sasha 3 percent” in a jibe at his supposedly low popular ratings.

The former collective farm director has come under fire for his handling of the economy, deteriorating relations with Russia, and his management of the coronavirus outbreak.

Even though health officials have registered tens of thousands of infections, Lukashenko has dismissed the pandemic as a hoax and refused to introduce a lockdown.

Residents of towns and cities across the country were forced to organize anti-virus measures among themselves, including wearing masks and working from home.

Yet the real challenge for critics will come if – as expected – Lukashenko wins the vote by falsifying the outcome, said Rudnik.

The Belarussian authorities have already shown they are capable of detaining protesters en masse and in the run-up to the vote, Lukashenko has overseen police running riot dispersal drills.

“People are not afraid now,” Rudnik said, pointing out that the opposition rallies have been sanctioned by the authorities.

“But an important step will be played out after the vote – will people take to the streets after the results are announced?” 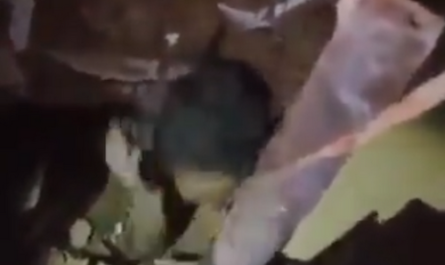