Belarus will close its borders with Poland and Lithuania and step up security measures at the Ukrainian frontier, Belarusian President Alexander Lukashenko said Thursday.

His announcement came with a warning that the countries could descend into war as he continues to blame Western influence for a sustained protest movement that broke out after his disputed re-election.

“We’re forced to withdraw our troops from the streets, put half the army under arms and close the state border from the West, primarily Lithuania and Poland,” Lukashenko, who has ruled Belarus with an authoritarian grip since 1994, said.

“Unfortunately, we’re forced to strengthen the state border with our fraternal Ukraine,” Lukashenko added at a women’s forum, according to the independent news website tut.by.

Lithuania, Poland and Ukraine have expressed “deep concern” toward the violent crackdown on anti-Lukashenko protesters that immediately followed last month’s presidential election. Lithuania and its Baltic neighbors Latvia and Estonia have blacklisted Lukashenko and dozens of other Belarusian officials over the violence, while Lithuania opened its borders to Belarusians fleeing the country, including opposition leader Svetlana Tikhanovskaya.

Lukashenko warned Thursday that he’s “forced” to build up a “common defense of the Union State together with the Russian president and defense minister,” the Poland-based Belsat broadcaster reported. Lukashenko met President Vladimir Putin in Russia this week, where he secured the Russian president’s backing and a $1.5 billion loan in exchange for stronger ties with Moscow.

“I don’t want my country to be at war. Moreover, I don’t want Belarus and Poland, Lithuania to turn into a theater of military operations,” Lukashenko said at the women’s forum Thursday.

“Therefore … I want to appeal to the peoples of Lithuania, Poland and Ukraine — stop your crazy politicians, don’t let war break out!”

Before the Aug. 9 vote, Belarus cracked down on its border with Russia as it searched for scores of mercenaries it had claimed to be from the Kremlin-linked Wagner military contractor.

Belarus has been one of the few countries worldwide to keep its borders open throughout the coronavirus pandemic. 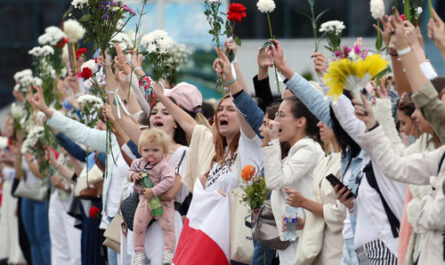 Belarus: a Week of Post-Electoral Turmoil