Journalists and technical personnel from Russia’s Kremlin-funded RT broadcaster have been standing in for staff on strike at Belarus state television and radio, Russia’s RBC news website reported Monday.

Workers at the Belteleradio broadcasting service walked off the job on Aug. 17 in protest against Belarusian President Alexander Lukashenko’s violent crackdown on peaceful opposition rallies. Lukashenko, whose claim of a landslide victory in last month’s vote triggered mass nationwide demonstrations, said days later that he had invited Russian replacements for the striking Belarusian journalists.

At least two teams from RT have arrived at Belteleradio’s studios since Aug. 18, RBC cited two unnamed Belteleradio employees as saying. The first team has since returned to Russia, according to an unnamed employee of Belteleradio’s TV news division.

“They included at least one IT expert, four technical personnel and RT correspondent Pridybaylo,” one of the employees said. 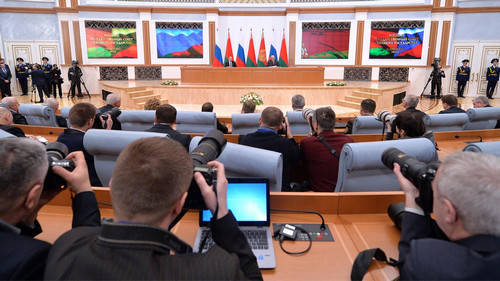 RBC reported that Belteleradio’s TV news division has been using RT’s materials in its broadcasting since at least Aug. 27.

Pridybaylo, described by several Belteleradio employees as a “liaison” between Belteleradio and the Russian journalists, told RBC that RT’s mobile TV station has also arrived in Belarus. He said it films content for RT’s video news agency Ruptly and sells it to other services around the world, including in Belarus.

Pridybaylo denied that RT journalists were officially employed by Belteleradio.

“It’s an amusing fake. No one from RT has come to work for Belteleradio,” Pridybaylo told RBC.

“I for example work exclusively at RT. The fact that I come and drink tea and coffee at Belteleradio is out of friendship,” he said.

Around 300 Belteleradio employees have joined the anti-Lukashenko strikes, of whom approximately 100 have resigned, RBC cited current and former staffers as saying.

The main challenger in Belarus’s disputed presidential election said Monday that she was ready to take over the country’s leadership after a wave of protests against President Alexander Lukashenko.

“I did not want to be a politician. But fate decreed that I’d find myself on the frontline of a confrontation against arbitrary rule and injustice,” Svetlana Tikhanovskaya said in a new video from exile in Lithuania.

“I am ready to take responsibility and act as a national leader during this period.” 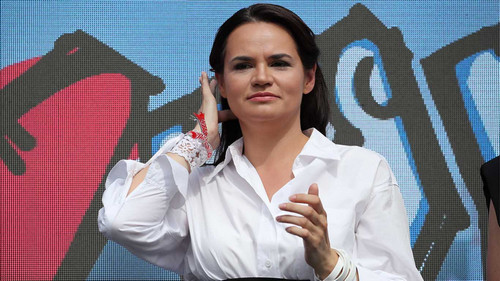 The video was released after tens of thousands took to the streets of Minsk on Sunday for the biggest demonstration yet in the protests against Lukashenko’s claim to have won the Aug. 9 election with 80% of the vote.

Tikhanovskaya, a 37-year-old political novice who ran after other potential candidates including her husband were jailed, accuses Lukahsenko of rigging the election and has called for a new vote.

Since leaving for neighboring Lithuania last week, under pressure from the government according to her allies, she has been calling for demonstrations and justice for a brutal police crackdown on protesters.

She has also demanded Lukashenko step down, but it was unclear if she was willing to take on the post of president.

In Monday’s video she said she would do so “in order for the country to calm down… so that we release all political prisoners and as soon as possible prepare the legal framework and conditions for organising new presidential elections.” 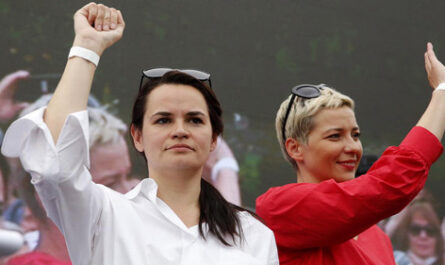 Despite business warnings, GOP moves ahead with voting bills Can the U.S. Still Cooperate With Russia’s Security Agencies?