Dozens of Beirut’s health facilities are “non-functional” the World Health Organisation has warned as the number of coronavirus cases in Lebanon’s capital surged by a third – sparking fears last week’s port explosion has triggered a secondary health crisis.

The deadly blast destroyed at least three major hospitals, putting them out of service and damaged another two.

The WHO said an assessment of 55 clinics and health centres in the capital showed more than 50 per cent of them are “non-functional”. An estimated 500 beds have also been lost.

One of the hardest hit was St George, among the country’s main coronavirus treatment and testing facilities.

The hospital’s administration shared exclusive CCTV footage with The Independent of the explosion showing the pressure wave ravaging the Covid-19 intensive care ward (ICU), ripping windows and doors out of their frames. 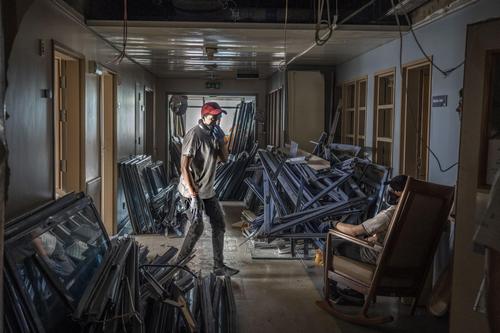 At least 17 nurses, patients and visitors were killed in the destruction.

“Lebanon’s ability to fight the coronavirus pandemic has been decreased by a sixth,” Alexandre Nehme, the hospital’s chief medical officer told The Independent from its gutted centre. Its 18 coronavirus patients had to be transferred to other centres which are at capacity and struggling amid a shortage of supplies.

Aid agencies have warned of a surge in coronavirus infections since the blast as Beirut’s remaining hospitals are forced to juggle those wounded from the blast and the newly infected patients.

At the same time, lockdown and social distancing efforts have been impacted by a massive search and clean-up operation that is underway and the fact that thousands of people are now homeless.

“We’ve seen the number of Covid-19 cases in Beirut jump up by over a third, putting even more pressure on an already overwhelmed health system,” said Matias Meier, country director for the International Rescue Committee in Lebanon.

“The clean-up operation is vast, the hospitals that remain open are almost full, and those that can still operate are in desperate need of more equipment,” he added.

The Lebanese government, battered by an unprecedented financial crisis, was already struggling to contain the pandemic and had just ordered a fresh lockdown when the blast stuck, killing more than 170 people and injuring a further 6,000.

The cabinet has since resigned after the disaster stoked public fury.

Before it stepped down, the government declared the state of emergency that granted the military the power to declare curfews, prevent public gatherings and censor the media, as well as refer civilians to military tribunals for alleged security breaches.

Investigations are underway into the causes of last week’s blast.

Initial assessments show it was caused by nearly 3,000 tonnes of poorly stored ammonium nitrate, that is used to make fertilisers and bombs, catching fire.

The country’s leadership has come under fire after it emerged both President Michel Aoun and Prime Minister Hassan Diab knew about the dangerous stockpile three weeks before the explosion.

The United Nations said on Thursday that 8,000 structures were damaged by the blast, among them 640 historic buildings of which 60 are at risk of collapse.

Unesco said museums, art galleries and religious sites had been hit by the blast, many of them located within the historic quarters of Gemmayzeh and Mar Mikhael that face the port.

Nearby is St George hospital, which directly looks over the epicentre of the blast.

Sami Said, part of the hospital’s administration, said the destruction of St George and several other hospitals will impact Lebanon’s ability to stamp out the coronavirus.

“For now, we have no plans to treat Covid-19 patients.”