Streaming down the central Minsk streets as far as the eye could see, anti-government protesters on Sunday sent the clearest of messages to Alexander Lukashenko, the grizzly authoritarian who they believe stole an election three weeks ago.

Before the day’s rally, there were some signs their movement had lost momentum; squeezed by a campaign of harassment from the state. Predictions of bad weather and the appearance of troops across town only added to a sense of foreboding.

In the event, some estimates put the protesters’ numbers at more than 200,000 – eclipsing last week’s protest, which set a record as the largest in Belarusian history.

Beginning early in the morning on Sunday, authorities tried to reduce the potential for a large gathering by cutting off avenues leading into Independence Square, the main focal point for the rally.

Army vehicles and riot police vans also sealed off the south side of the square, meaning many protesters had to take an extended detour to join. 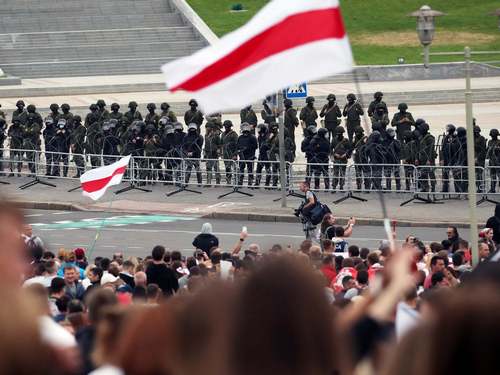 After occupying most of the streets in and around Independence Square, at approximately 4.30pm local time (2.30pm BST) crowds moved to the city’s war memorial, the location of last week’s march. There they were met by lines of barbed wire, riot police and interior ministry troops. By 6pm, most protesters had left but a smaller number began a march towards the official presidential residence about a kilometre away – before turning back.

But Mr Lukashenko seemed to take the threat seriously, and assembled a wall of heavy military equipment between the residence and oncoming demonstrators. Lines of troops also appeared at various points in central Minsk. At approximately 7pm local time, a helicopter was seen landing in the compound.

Footage later released by the leader’s own press service showed him arriving at the palace, with Kalashnikov rifle in hand, alongside his 15 year old son Kolya in combat uniform.

In a menacing message released 15 minutes before the beginning of the rally, the Belarusian defence ministry said it “would not hesitate” use force if necessary.

“We warn you that if the peace is disturbed you won’t be dealing with the police, but the army,” it said.

A short while later, the head of the Minsk police joined in, claiming he had information protesters were planning provocations. “Youthful maximalism and rebellious behaviour are inappropriate and dangerous,” he added.

In reality, the Belarusian protests have been remarkable for their law-abiding nature – and in the face of the often egregious violence of the government. Protesters stop at red lights, pick up their rubbish, and go home at an arranged time.

Authorities have not yet found an effective way to answer that challenge. On Sunday, they tried to persuade people to leave with increasingly threatening messages, blurted on the loudspeakers overlooking Independence Square.

Then they turned to playing rousing war songs – but these were drowned out with calls for Mr Lukashenko to be locked up.

“You might think all this absurd,” says 33-year-old protester Anna Korneichuk, “but this has been our reality for the last 26 years.”

Ms Korneichuk was holding a banner condemning the recruitment of Russian journalists to state TV, in defiance of a strike by local journalists. It is one of hundreds on display, with slogans ranging from the angry to the outright cheeky.

“Alex, have some tea,” read one, a reference to the apparent poisoning of Russia’s leading opposition politician, Alexei Navalny, in a drink. Others bring attention to the torture that went on in Mr Lukashenko’s jails, with many promising a trip to The Hague.

On Saturday, a volunteer search party announced they had found one man who had been missing since 12 August. Mikita Kryuchou was found dead in a forest in Minsk, with evidence he had been beaten, bringing the official death toll to five.

Seven people are still missing following the crackdown of 9-12 August. Armenia PM Takes to the Streets to Denounce ‘Coup Attempt’