A 17-year-old Illinois resident has been arrested by police for first-degree murder after allegedly fatally shooting two Wisconsin protesters on Tuesday evening.

Kyle Rittenhouse of Antioch, Illinois, was labelled a “fugitive of justice”, according to Lake County, Illinois Clerk of Courts public records first obtained by The Daily Dot.

The Antioch Police Department confirmed to The Independent that Mr Rittenhouse “voluntarily surrendered” himself to the department on Wednesday morning after an arrest warrant was filed. The suspect allegedly fled Kenosha, Wisconsin for his home state following the shooting.

“The suspect fled the state of Wisconsin with the intent to avoid prosecution for that offence,” according to the document.

“This morning Kenosha County authorities issued an arrest warrant for the individual responsible for the incident, charging him with first degree intentional homicide,” the Antioch Police Department said in a press release. ”The suspect in this incident, a 17-year-old Antioch resident, is currently in custody of the Lake County judicial system pending an extradition hearing to transfer custody from Illinois to Wisconsin.”

Mr Rittenhouse has been assigned a public defender and is expected to appear in court on Friday. 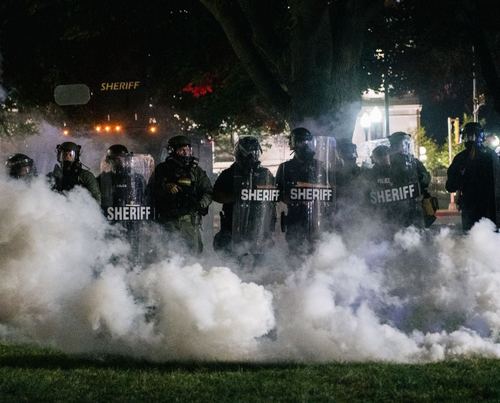 In a video posted by a reporter for The Daily Caller, Mr Rittenhouse was interviewed prior to the late-Tuesday evening shooting and was asked what his purpose was at the protest.

“So people are getting injured and our job is to protect this business,” Mr Rittenhouse said. “And part of my job is to also help people. If there is somebody hurt, I’m running into harm’s way. That’s why I have my rifle because I need to protect myself, obviously. I also have my med kit.”

Two people died from the shooting on Tuesday and one person was hospitalised with non-life-threatening injuries.

Video footage from the event showed a gunman in the middle of the street brandishing a semi-automatic rifle before firing off the shots that hit multiple people. Witnesses then said the gunman was allowed to walk past police without being arrested. In one video, protesters are heard shouting at police that he was the gunman as an officer drove by to attend to the victims.

As video footage circulated about the shooting, social media users identified the potential suspect as Mr Rittenhouse. His Facebook page is no longer available to the public, but previous posts allegedly included Blue Lives Matter and pro-police statements. One image circulating of Mr Rittenhouse showed him carrying a rifle similar to that which was allegedly used during the shooting.

Kenosha County Sheriff David Beth confirmed to the Milwaukee Journal Sentinel earlier on Wednesday that armed people have been patrolling the streets of Kenosha in response to protesters looting, burning, and doing other damage to buildings and cars in the area. He could not say if the gunman from Tuesday was among them.

Wisconsin’s lieutenant governor, Mandela Barnes, who is black, slammed the freedom of gunmen to walk the streets with rifles and face no repercussions.

“How many times across this country do you see armed gunmen, protesting, walking into state Capitols, and everybody just thinks it’s OK?” Mr Barnes said in an interview with Democracy Now!. “People treat that like it’s some kind of normal activity that people are walking around with assault rifles.”

The FBI has been called to assist in investigating the case.

The town of Antioch, where Mr Rittenhouse lives and surrendered himself, is just a 30-minute drive from Kenosha.

Police have not indicated if more suspects are being investigated for the shootings. Mr Rittenhouse is to be charged with at least one charge of first-degree intentional homicide. We can do big things, Schumer says as Senate approves aid