When EU High Representative Josep Borrell visited Moscow at the beginning of February, the Russian leadership had a choice: it could have accepted Borrell’s offer of dialogue (which he had made despite fierce criticism at home) and taken a more conciliatory tone. Instead, Foreign Minister Sergei Lavrov opted to offend his interlocutor.

Accordingly, EU-Russia relations got off to a terrible start to 2021, while still suffering from the degradation and shocks of the past year.

In Russia, the COVID-19 pandemic once again reinforced a world view in which supranational formations like the EU have no place. The message that the Russian authorities and state-controlled media have been delivering since last year is that authoritarian great powers like China and Russia have responded more effectively to the virus than the West. Western democracies — above all the United States — have failed, and exposed the weaknesses of their political systems and irreparable fault lines in their societies.

On top of all that, the EU institutions in Brussels have proven incapable of handling the pandemic or preventing EU member states from pursuing self-interested policies.

It is true that COVID-related developments in the EU have been far more exposed to both national and international public scrutiny. Such is the logical consequence of the greater transparency of democratic political systems. No comparable openness existed or exists with regard to the coronavirus situation in Russia. While huge efforts have been put into the mobilization of the health care system, independent investigations suggest that infection and death statistics have been heavily manipulated, particularly in the Russian regions.

Premature and contrary proclamations of success with regard to Russia’s Sputnik V vaccine underpin the impression of politicization. Independent media, activists, and health workers face severe punishment for the spreading of “fake news” about the pandemic. Under such circumstances, it remains difficult to get a clear picture about the real situation in Russia. The excess mortality statistics for 2020, published by the Federal State Statistic Service at the beginning of February, indicate that the death toll is likely to be more than quadruple the official number, reaching well over 300,000 deaths.

Regardless, Moscow insists that Russia has fared much better in the pandemic than Western democracies. It sees itself in a position of relative strength that other international actors need to acknowledge. In Brussels and other EU capitals, on the other hand, the portrayal of the situation in the EU by the Russian authorities and media was perceived as yet another attempt to undermine and destabilize. 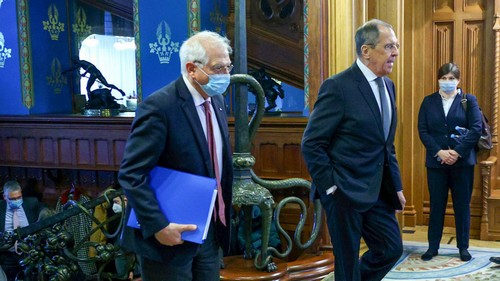 So instead of jointly addressing a common threat, the sides drifted apart even faster in 2020. The alienation is threatening to become even deeper this time, as closed state borders and international travel restrictions have almost completely interrupted societal exchange for the first time since the end of the Cold War.

Compared to the erosion of the relationship caused by the pandemic, the effect of the poisoning of the opposition politician Alexei Navalny on EU-Russia relations was that of an earthquake.

In the autumn, it tipped Moscow and Berlin over the edge. German Chancellor Angela Merkel’s statement on September 2 that Navalny had been poisoned with the Novichok nerve agent in order to silence him will not be forgiven by Moscow’s ruling circles; nor will Berlin’s active role in imposing new sanctions.

Berlin’s moves were perceived as a “stab in the back;” as the ultimate rejection of the “special relationship” between Germany and Russia. Moscow reciprocated by suggesting repeatedly that Navalny may have been poisoned on German territory, and accusing Berlin of not cooperating to clarify the facts.

The expulsion of a German diplomat (along with Polish and Swedish counterparts) — announced at the very time that Borrell was in Moscow — should also be seen in this context. Russian-German relations have long been in a difficult state. But the current crisis is particularly vicious and might be irreparable.

If so, that fundamentally changes the fabric of Russia’s relations with the EU, in which Germany has always played a key role. Finding advocates for political dialogue with Moscow within the EU will become a more difficult task in the future.

Navalny’s return to Russia on January 17 has created a prominent link between Germany/the EU and Russian domestic politics — the geopoliticization of domestic politics — which neither side will be able to ignore in the future. Navalny could hardly be called a pro-European or pro-Western politician in the past.

His agenda is predominantly domestic, focused on the fight against corruption and the United Russia ruling party, and sprinkled with nationalist elements.

When he was flown to Berlin for treatment, however, the state-controlled media unleashed a campaign portraying him as a Western agent.

This might have remained insignificant had Navalny chosen a life in political exile. But he decided to get back into the ring and fight.

Now, both sides consider the EU a part of this fight: for the Kremlin, Navalny and his supporters are just another bunch of puppets directed by hostile Western forces. Navalny’s team, for their part, are actively appealing to Western governments: in a letter to U.S. President Joe Biden, which was also delivered to EU-leaders in Brussels, they call for Western sanctions against thirty-five Russian officials and businesspeople. For the Kremlin, this only “confirms their foreign agent status.”

With the protests and the violent reaction by the authorities since Navalny’s return, the pattern of state-society interaction in 2021 seems to be set: more and broader repression against growing public discontent. This is an asymmetric and open-ended standoff, and it will likely last and intensify as the Duma election in September is approaching.

No Light at the End of the Tunnel

Toward the end of 2020, developments in the neighborhood (Belarus and Nagorno-Karabakh), and the U.S. election seemed to leave their traces on Russian foreign policy discourse. Some observers called for more realism and restraint to make Russia’s engagement abroad more cost-efficient. Others argued that Moscow should take a more moderate approach toward the West as the Biden administration sets out to consolidate transatlantic relations.

The rapid agreement between Moscow and Washington on the prolongation of the New START treaty indicates that some of these considerations coincided with the analysis in the Kremlin. No change of position can be observed, however, in the Russian approach to the neighborhood. With domestic tensions on the rise at home, Moscow is even less likely to give up on supporting Belarusian President Alexander Lukashenko or take a more accommodating stance on the Donbas.

Moreover, Russia’s recent actions vis-à-vis Brussels and Washington suggest that isolationist ideas are gaining traction in foreign policy decision circles, which are increasingly dominated by the security services. The signals to the EU could not be clearer: “The narrative of liberal values, human rights, and freedoms is no longer universal,” and Russia rejects the mere “notion of external standards” or discussion of its domestic affairs with the EU (or any other Western actor). On the contrary: Russia has started a counter-attack by confronting Western democracies with their own weaknesses.

Apparently, the purpose of the unwelcoming treatment of Borrell in Moscow was to discourage Western leaders from raising the Navalny case in the future. This is not likely to succeed.

It needs to be understood, though, as part of a bigger attempt to isolate the EU institutions in Brussels from Moscow’s relations with EU member states (though the expulsion of diplomats during Borrell’s visit was a serious mistake in this respect).

This attitude is not new, but it is getting more explicit. EU member states are well advised to think instead about how to strengthen Brussels’ position in their relations (not only) with Russia. At the same time, Brussels needs to perform better. Borrell’s weak appearance at the press conference with Foreign Minister Lavrov did not serve the EU’s cause and must not be repeated.

Moscow’s rough handling of Borrell’s visit and of ties with the EU more generally will shape the discussions about the EU’s approach toward Russia at the Foreign Ministers Council on February 22 and at the European Council on March 25-26. Unlike last year, when the German EU presidency was getting ready for a new debate about areas of selective engagement, the fourth of the EU’s five guiding principles will hardly be in the spotlight this time around.

Rather, discussions will focus on sanctions and strengthening EU resilience against Russian interference, disinformation, and Russian corruption and money laundering in the EU.

As a result, sadly, the gloomy predictions currently doing the rounds in Moscow about the breaking off of relations and increasing mutual isolation might partly become true, at least in  terms of political and security relations. But the EU’s perspective is and must be broader than that.

This applies not only to economic relations, of course, but also to climate change, public health, stability in the Middle East and other global and regional issues.

Most importantly, it is in the EU’s key interest not to lose touch with Russian society. Here the EU needs to be more realistic than the Russian authorities about what it can achieve. Its influence in Russia was never transformative, and it has been shrinking for almost two decades. Societal contacts are the first the Russian authorities will sever as political tensions grow: they are most inconvenient, and the cheapest to disrupt. In fact, this process is already in full swing.

The EU’s challenge is to strike a smart balance between counter-action, self-protection, and preserving spaces for societal engagement.

This won’t be an easy task, as Moscow seems to believe that there is nothing left to lose. But that is not true. There is a great deal at stake. 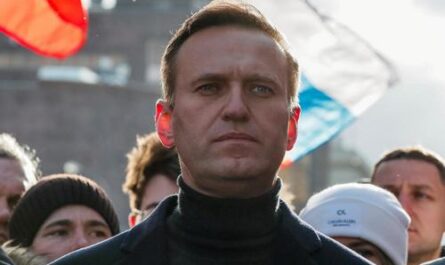 A Decade After Pussy Riot’s ‘Punk Prayer,’ Maria Alyokhina Still Has Plenty to Protest About 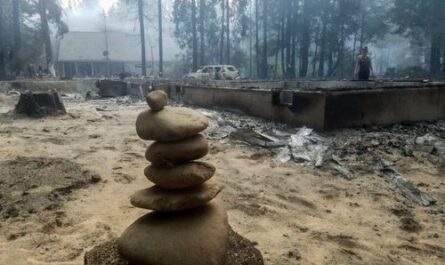