A 71-year-old man has been arrested with a gun and 20 rounds of 9mm ammunition while parked at an intersection near the Rayburn House Office Building just steps away from the Capitol in downtown Washington, DC.

Dennis Westover from South Charleston in West Virginia was arrested on numerous charges including having unregistered ammunition and unlawfully possessing a firearm. He was detained shortly before 2 pm on Wednesday in the middle of an intersection by Capitol Police. They found a 9mm black Sig Sauer in his car along with 20 rounds of ammunition, The Daily Beast reported.

NBC 4 investigative reporter Scott MacFarlane tweeted that he didn’t see “any federal or DC criminal cases in this guy’s past”.

The building, named after former Speaker of the House Sam Rayburn, is where 169 out of the 435 members of the House of Representatives have their offices. The building is connected to the Capitol by a subway tunnel with two cars.

More than 20,000 members of the National Guard were deployed all over downtown Washington, DC in the days leading up to the inauguration of President Joe Biden on 20 January. 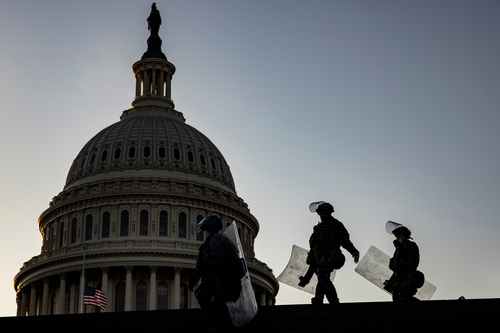 7,000 guardsmen remain in the nation’s capital, and as many as 5,000 will stay at least through the end of March as a threat looms over the second impeachment trial of former President Donald Trump.

A 25 January memo says the National Guard will stay “in continued support of District and Federal civil authorities during anticipated First Amendment demonstrations and Civil Disturbance in the District of Columbia,” according to Politico.

In addition to DC’s National Guard, of which there are 3,400 members, troops from Maryland have been ordered to remain at least until 15 March. Several units were still being asked to work 12-hour shifts as of Monday.

The Department of Homeland Security issued a national terrorism bulletin Wednesday warning of the lingering potential for violence from people motivated by antigovernment sentiment after President Joe Biden’s election, suggesting the 6 January riot at the Capitol may embolden extremists and set the stage for additional attacks.

The department did not cite any specific plots but pointed to “a heightened threat environment across the United States” that it believes “will persist” for weeks after Mr Biden’s 20 January inauguration.

It is not uncommon for the federal government to warn local law enforcement through bulletins about the prospect for violence tied to a particular event or date, such as July 4.

But this particular bulletin, issued through the department’s National Terrorism Advisory System, is notable because it effectively places the Biden administration into the politically charged debate over how to describe or characterize acts motivated by political ideology, and suggests it regards violence like the kind that overwhelmed the Capitol as akin to terrorism. 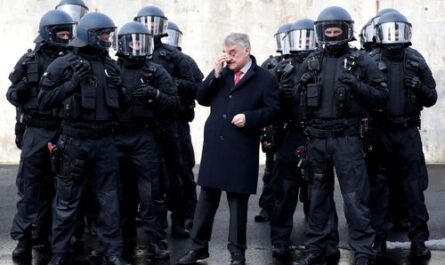 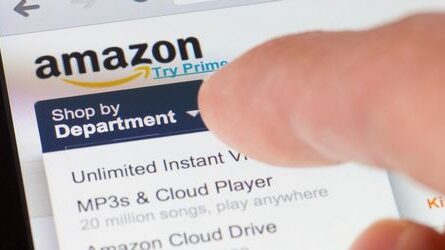