A wave of protests swept across Russia on Saturday — in what appears to be the most significant challenge to Vladimir Putin’s authority in a decade. At least 100,000, likely much more, took to the streets of over a hundred towns and cities over eleven time zones, in the middle of a pandemic, in temperatures that in one case reached minus 50, and despite credible threats and occasional reality of a violent crackdown.

The protesters were calling for the release of Alexei Navalny, a Putin critic poisoned by a nerve agent and jailed on his return to Russia. But their agenda was wider than that — with many expressing anger at the direction of a country increasingly falling under the influence of a narrow security elite.

It would be a mistake to conclude yesterday marked a tipping point for Vladimir Putin. But there is a worrying enough story for the now 20 year leader: The task for the Kremlin had been to show that Navalny could not muster enough people, and it failed. The task for Navalny had been to avoid this, and he more than delivered.

Despite most of the team being behind bars, Navalny’s network was able to turn out protesters from all constituencies, ages, and backgrounds, and not only traditional demonstrators either. According to sociologists working at the Moscow rally, over 40 per cent were protesting for the first time.

Neither was it a weird meeting of schoolchildren and their “experienced pedophile groomers” as pro-Kremlin media predicted. According to the same survey, only 4 per cent were under 18, with the main contingent young middle age. 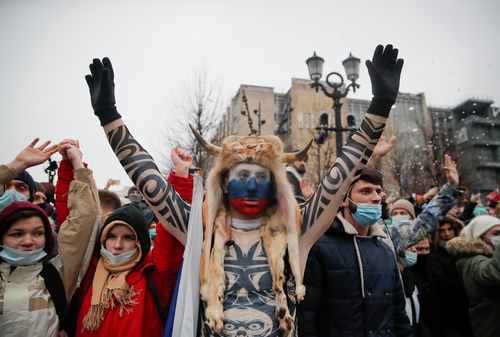 Clearly, every protest has its own unique DNA, but Saturday appeared to pull in features seen in other recent local rallies.

There were flashes of the giddiness of the 2011-12 anti-Putin rallies, when the Russian opposition saw an opening and mistakenly believed it had the Kremlin on its ropes. There were moments of Maidan-style anger from a “humiliated and offended” nation — these the words of a previously pro-Kremlin commentator.

The 2019 student-led protests in Moscow were also there in the mix — not least in the fightback some protesters put up against police and the understanding it would likely end with a similar crackdown.

But at least two things set Saturday apart from previous protests. The first is the geographical spread. This was by no means a Moscow-centric event, but focussed in towns not previously associated with opposition sentiment.

According to Mr Navalny’s team, the majority of people in these new hotspots had been spurred on not so much by the politician’s jailing, but by his report into an opulent Black Sea resort apparently built for Vladimir Putin — and where one toilet brush costs the equivalent of a year’s pension.

Already nearly 80 million people have viewed the investigation, which was published the day after Mr Navalny was jailed.  The Kremlin has yet to come up with a convincing counter-narrative to the embarrassing report other than calling it a “broken record.”

The second new aspect is the chaotic and unsure nature of the policing operations on display. In Moscow, for example, officers unsuccessfully attempted to clear the central meeting point on Pushkin Square several times.

Only later did they employ tools such as flashbang grenades. Violence was certainly harsher in the northern capital St Petersburg, which saw a very high turnout. There, a 54-year old woman was sent to intensive care after a riot police officer kung-fu kicked her through the stomach, smashing her head onto the asphalted road.

Konstantin Kalachyov, a well-connected political analyst based in Moscow, says the authorities are somewhat “disorientated” by events and have retreated into “deep defence” mode.

They are still intent on finding “exact and tidy” solutions that dent the abilities of Mr Navalny’s network, he says — but want to avoid uncontrollable cycles of coercion and outrage such as seen in Viktor Yanukovych’s Ukraine in 2013-14 and Alexander Lukashenko’s Belarus last year.

It is not clear how long a “deep defence” mode can last given the continuing trigger of Mr Navalny’s imprisonment, which is likely not up for negotiation. Obvious weakness and authoritarianism are never a stable combination. Honduras to make it almost impossible to legalise abortion in future