Dr Anthony Fauci has sought to dispel lingering concerns about any of the Covid vaccines that are being rolled out across the country, urging Americans that all three types of approved jab are “highly efficacious”.

While many Americans have harped on the relatively lower nominal efficacy rate of the newly approved Johnson & Johnson vaccine – 66 per cent globally, compared to 94 per cent for the Moderna vaccine and 93 per cent for the Pfizer vaccine – doctors and scientists, including Dr Fauci, have said all three vaccines are extraordinarily effective at preventing serious illness and death.

The numbers Americans should be emphasising are that all three vaccines have proven 100 per cent effective at preventing deaths. The risk of hospitalisation also plummets to virtually zero for people who receive the vaccine.

“The J&J data that just came out – when you have advanced critical disease, there were no hospitalisations and no deaths. That’s good news,” Dr Fauci said in an interview with CBS’s Margaret Brennan.

Other members of Joe Biden’s coronavirus advisory board highlighted that point in an op-ed in USA Today last week.

“The varying ‘effectiveness’ rates miss the most important point: The vaccines were all 100 per cent effective in the vaccine trials in stopping hospitalisations and death. Waiting for a more effective vaccine is actually the worst thing you can do to lower your risk of getting severely ill and dying of Covid-19,” the doctors on Mr Biden’s team wrote.

Making his rounds on the Sunday political talk show circuit, Dr Fauci, the top infectious disease expert in the US, championed all three available vaccines for helping draw the pandemic to a close.

“These are three highly efficacious vaccines,” he said in an interview with CNN’s Dana Bash on Sunday.

“If I were not vaccinated now and I had a choice of getting a J&J vaccine now or waiting for another vaccine, I would take whatever vaccine would be available to me as quickly as possible for the simple reason of what I said a moment ago – we want to get as many people vaccinated as quickly and expeditiously as possible,” Dr Fauci said.

In a separate interview on Sunday with ABC’s George Stephanopoulos, Dr Fauci pushed back on the notion that the Johnson & Johnson vaccine is less effective than the Moderna or Pfizer vaccines, which, unlike the new vaccine, were tested mostly on populations that had not yet been widely exposed to the new variants of the virus coming from South Africa and the UK.

“This is a good vaccine,” Dr Fauci said of the Johnson & Johnson vaccine. “I think we need to pull away from this comparing and parsing numbers until you compare them head-to-head. Just be really grateful that we have three really efficacious vaccines.”

He underscored his point: “That’s the bottom line.”

While the US has made tremendous progress in the last several weeks inoculating its citizens – roughly 15 out of every 100 Americans have now received at least one dosage of a vaccine – the country’s population has not reached herd immunity.

The seven-day average for Covid-related deaths has dropped by nearly 33 percent over the last week. But thousands of Americans are still dying from the virus every week, rates that are still stretching some hospital systems thin. Most Americans are still susceptible to the virus and should maintain social distancing and exercise other precautions, the Centers for Disease Control and Prevention has recommended.

Now is not the time to abandon risk-reducing steps, Dr Fauci said on Sunday, agreeing with the CDC’s latest guidance.

“Whenever we hit a peak and start coming down, understandably you start saying, ‘Let’s start pulling back,’” he told CNN. “It is really risky to say, ‘We’re over, we’re on the way out, let’s pull back.’”

Dr Fauci has previously said Americans could be asked to wear masks through the end of this year and into 2022, for instance.

His comments on Sunday fall in lockstep with those of his boss, Joe Biden, who has also warned that the new variants could slow progress towards crushing the pandemic.

While Mr Biden has heralded the Johnson & Johnson vaccine as another development that will expedite the end of the pandemic, he stressed that the US is still many months away from a return to pre-pandemic normalcy.

“This not a victory lap,” the president said at an event last week marking the 50 millionth vaccine dose administered in the first six weeks since he took office.

“Everything is not fixed. We have a long way to go. And that day when everything is back to normal depends on all of us,” he said. 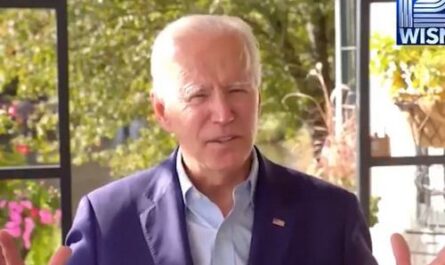