The police officer who shot a Trump supporter has been placed on leave pending an investigation, as Capitol Police chief Steven Sund said they had planned for peaceful protests, not mass riots.

As law enforcement comes under scrutiny over its failure to secure the Capitol Building, Mr Sund release a statement saying they had a “robust plan” to address peaceful First Amendment protests.

“But make no mistake – these mass riots were not First Amendment activities; they were criminal riotous behaviour.  The actions of the USCP officers were heroic given the situation they faced,” Mr Sund said.

He said the rioters used metal pipes, chemical irritants and other weapons against officers as they forced their way toward the House Chamber, where members of Congress were sheltering in place.

Capitol officers were also responding to a pipe bomb and a suspicious vehicle to clear threats of hazardous materials, while a Capitol Police officer shot dead Ashli Babbitt. Another three people died of “medical emergencies”.

“As per the USCP’s policy, the USCP employee has been placed on administrative leave and their police powers have been suspended pending the outcome of a joint Metropolitan Police Department and USCP investigation,” Mr Sund said. 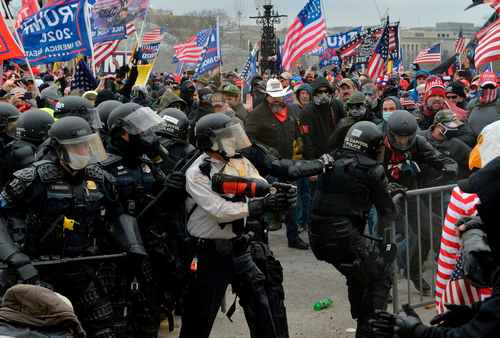 Metropolitan Police Department chief Robert Contee said at a press conference on Thursday that 56 officers were injured throughout the night, with one officer remaining in hospital after being beaten and tased by the mob.

“We still have a significant amount of work ahead of us to identify and hold each and every one of the violent mob accountable for their violent actions,” Mr Contee said.

It took longer than two hours for Capitol Police and back-up from the Metropolitan Police Department to regain control and restore order, with at least 68 people arrested either on the grounds of the US Capitol (41) or for violating the 6 pm curfew imposed by the mayor, Muriel Bowser.

Ms Bowser said a state of emergency would be in place until after the inauguration of Joe Biden, but that they had to find out what happened to make sure it didn’t happen again.

“I’m upset that my police officers were put in harm’s way when they were just doing their jobs. And I’m even upset that somebody died in that building who was breaking into the building,” she said.

US Secretary of the Army, Ryan McCarthy, said there will be more than 800 security personnel at the Capitol for the next 30 days, while a fence is being built around the perimeter.

The increased security comes as law enforcement faces scrutiny for its response to the violence, with former Capitol Police chief Terrance Gainer saying the “outnumbered” police underestimated the strength of rioters and overestimated their ability to control the crowd.

“We failed. We did not secure the Capitol and people need to be held responsible and explain what went on,” Mr Gainer said on CNN.

“I’m pretty sure the Capitol Police were trying to do something a little softer than BLM protests, as we try to welcome protesters up there, but it got out of hand.”

Former MPD police chief from 1998 to 2007 Charles Ramsey, told the outlet that anybody inside the Capitol building should have been face-down in handcuffs.

“There’s no way they should have gotten into that building in my opinion, but we’ll look into that later, that’s kind of like the hogwash after the event,’ Mr Ramsey said,

Former DC police chief, Charles Ramsey, said he had no idea how police could not have been prepared for the riot, according to The New York Times.

“They were overwhelmed, they did not have the resources. You have to be able to protect the Capitol. That is not OK,” he said.

Congress has begun to seek answers, with California Democrat Maxine Waters saying on Twitter they must investigate the security breach, which she warned police was a threat about four days ago.

“He assured me the terrorists would not be allowed on the plaza & Capitol secured,” she said.