The United States on Thursday announced its toughest set of sanctions against Russia since 2018 in retaliation to a host of infringements.

The measures come as U.S. President Joe Biden proposed he and President Vladimir Putin hold a summit on neutral ground to discuss Russia-Ukraine tensions. Following the sanctions announcement, Biden said that it was also “time to de-escalate” for Moscow and Washington.

Here’s a look at how Russian officials and personalities have reacted to the measures and Biden’s comments: 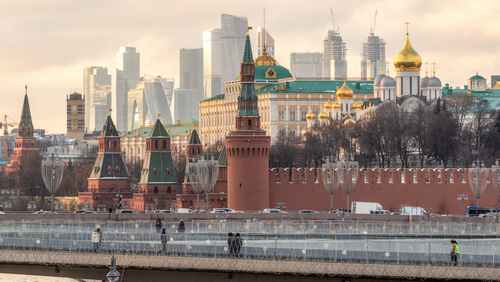 — “You have probably already heard the statements of our economists in this regard. I can only repeat that macro-stability is fully ensured and our regulator acts confidently and successfully.”

— “We condemn any aspirations to sanction and consider them illegal. In any case, the principle of reciprocity still applies.”

— “We would not want to use ‘Lenin’s formula’ in our bilateral relations — one step ahead, two steps back.”

— “President Putin has spoken about the appropriateness of building relations, normalizing relations and de-escalating relations. He has repeatedly said that we are ready to develop our dialogue to the degree that our counterparts are ready for this. In this regard, it is indeed good that the points of view of the two heads of state coincide on this. … The addiction for sanctions remains unacceptable.”

“The United States is not ready to make peace with a multipolar world without an exclusive American hegemony.”

“The response to the sanctions will be inevitable; Washington must understand that they will have to pay for the degradation of bilateral relations. The responsibility for what is happening lies entirely on the U.S.”

“NATO countries’ chain reaction in support of U.S. sanctions is a sign of a vicious bloc discipline, when decisions are made not on the basis of real facts, but on command, demonstrating pseudo-solidarity. This is a 21st-century vassalage.”

“The Bank of Russia notes that the share of foreign investors in the total volume of government debt and even more so in primary placements has significantly decreased over the past year.”

“The Bank of Russia, if necessary, is ready to use the instruments at its disposal in order to preserve financial stability.”

“There can be no de-escalation in relations between Russia and the U.S., all of Biden’s complimentary words to Moscow are absolutely empty rhetoric.”

“What is remarkable in Biden’s speech is that he completely changed his rhetoric. Until recently, he insulted Vladimir Putin and spoke of Russia in a mentoring tone. But now there is nothing left of that tone. Moreover, he became apologetic.” The Pakistan woman who volunteered to help Covid victims