Tens of thousands of protesters took to streets in dozens of cities across Russia on Saturday in protest at the poisoning and imprisonment of Kremlin critic Alexei Navalny, laying down the gauntlet to authorities who had threatened the full force of law — and more — in return.

The reality of Saturday’s showdowns confirmed some of the worst predictions, with riot police employing tactics designed not so much for law enforcement as sowing panic among the people.

In Vladivostok in the far east, where the protests began, officers charged into crowds, and dragged demonstrators away at random. At least one lost consciousness by the time he was delivered to a police van.

Journalists and photoreporters were among the minimum 1,338 arrested nationwide, often violently, a number that is sure to grow as the day goes on.

In Moscow, detentions began even before the advertised 2pm start time. They took a standardised form. Groups of three or four riot police officers would depart from the vans, before making a last minute charging left or right into their prey. The victims were random enough, but a preference was made for youngsters. In one case a 10 year old boy was manhandled away.

At around 3.15pm, police cleared the central meeting point on Pushkin Square — detaining and clubbing those unfortunate to fall in their way. Journalists were among the recipients of police batons. Around the same time, Yulia Navalnaya, Alexei’s wife, joined the list of those detained. 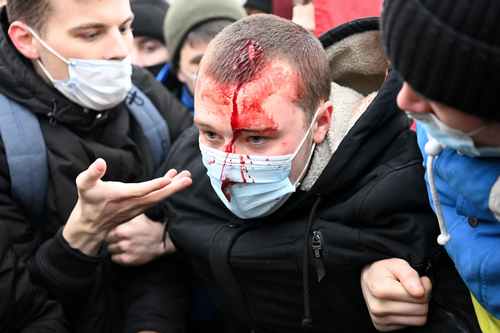 The well-attended protests appeared to mark the start of a new phase of struggle between the Kremlin and the opposition.

In Moscow crowds hugged central streets far away from Pushkin Square. According to the Reuters news agency at least 40,000 people demonstrated in Moscow alone, which would make it the biggest protest the capital has seen since 2012. According to authorities, notorious for underestimating their numbers, just 4,000 had turned up.

Protesters carried banners – “I’m not scared,” “I’m against lawlessness” and “I’m not scared of grandad in his bunker,” a reference to Vladimir Putin who has spent much of the last year in Covid-19 isolation. Slogans sent similar messages – “Freedom to Navalny,” “Putin is a thief,” and “fascists”.

In the build up to the protests, authorities had left the heaviest of hints of violence. Television and pro-Kremlin media dutifully amplified official warnings that demonstrators risked batons and imprisonment. Prosecutors secured the latter for many of Navalny’s top lieutenants, 49 of whom were arrested by Saturday morning.

The Kremlin seems to have been particularly spooked by the resonance of Alexei Navalny’s plight among the younger generation.

In the days before the protests, students were called in for unscheduled exams, and warned their participation in rallies could result in expulsion. Moscow mayor Sergei Sobyanin warned against “cynical attempts” to co-opt minors into an illegal protest. Parents were meanwhile told not to allow their children to attend the marches, or risk arrest themselves.

The authorities’ obvious concern appears to have stemmed from social media data. On TikTok, videos posted under the hashtag #23January were viewed more than 130 million times.

Some of those videos referred to the findings of Mr Navalny’s investigation into the opulent Black Sea palace allegedly being built for the president, which he released this week while in jail. One popular video offered English language advice about pretending to be an American tourist in the event of being arrested.

In a first message since his Sunday arrest, Mr Navalny thanked the “schoolkids” who, he said, his lawyer suggested ‘wreaked havoc’” on the Chinese social media platform. “I don’t know what that means, but it sounds cool,” he said.