Like an abandoned prison or asylum, the overgrown grounds of the now-shuttered Marghazar Zoo are filled with ghosts, and their rusting, barred enclosures hold sad clues to the neglect and mistreatment its inhabitants endured.

The most haunting site is the scarred concrete hangar where Kaavan the Asian elephant – the zoo’s main attraction – spent years in isolation, often immobilised by leg chains, rocking back and forth for hours. A heavy ring is still bolted to the floor, surrounded by brown husks of the sugar cane that was his only diet.

Six weeks ago, Kaavan was freed from his prison, after a crusading Pakistani judge took an interest in the zoo’s problems and foreign activists led by the singer Cher took up his plight. On 30 November, the long-suffering elephant was flown in a custom-built steel box to a sanctuary in Cambodia. Animal lovers worldwide cheered.

But for years, while the zoo attracted thousands of visitors, many of its animals met harsh or unknown fates. Rights groups and journalists say animals were chronically underfed and poorly attended when sick. Dozens died, often of causes that were never explained. Others disappeared or may have been sold for profit.

“There was only one qualified veterinarian at the zoo, and none of the other staff had the training to manage or care for animals,” says Muhammad bin Naveez, founder of an informal group called Friends of the Islamabad Zoo. “We visited all the time, and we tried to point out problems we saw, but nobody listened.” He says workers were often hired through political connections or made money on concessions. “Nobody gave a damn.” 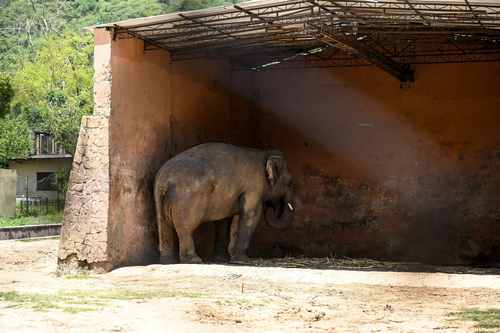 The Marghazar Zoo is now closed, its cages empty, the grounds to be turned into a modern wildlife conservation park. Malik Amin Aslam, the top official at the Ministry of Climate Change, says the closure has created an “opportunity to start from scratch and do things right.” He blamed most of the zoo’s past problems on “mismanagement”.

“The lesson is clear,” he says. “We have to care for our animals and nature. We have to have proper administration, not let unreliable people be in charge.”

Other city zoos in Pakistan have had similarly troubled histories. A giraffe died several weeks ago at the Peshawar Zoo in northwestern Pakistan, and lions were recently discovered starving at the Karachi zoo. The sprawling Lahore zoo, more than 150 years old, has lost chimpanzees, Bengal tigers and black bears to disease in recent years, and other animals have reportedly shown signs of severe psychological illness.

Cruel animal practices persist out of the public eye, including dog fighting and bear baiting. Two Himalayan brown bears at the Islamabad zoo were once “dancing bears” who were forced to perform in public, their teeth removed and their snouts pierced with rope. They were relocated to a wildlife sanctuary in Jordan last month in poor health.

Pakistan is not a vile place incapable of keeping animals. It’s just that animals have not been on the priority list

The Islamabad zoo, a high-profile attraction in the nation’s capital since it opened in 1978, has aroused growing concern among animal lovers for years. Last spring, a group petitioned the Islamabad High Court for help. In May, Chief Justice Athar Minallah issued a scathing 67-page ruling, in which he found the zoo had kept its animals in “extremely disturbing” and “shockingly deplorable conditions,” exhibiting them for entertainment while ignoring their health and well-being.

Grappling with one of the petitioners’ demands, that animals in the Muslim nation be declared to have their own “non-human” rights, Minallah quoted from the Koran and noted that “Islam regards animals as sentient living beings and creations of Allah” that “deserve care and compassion”.

He also cited contemporary rulings from around the world in which judges had ordered suffering elephants, orangutans and killer whales freed from captivity. “While it may be arguable that a chimpanzee is not a ‘person’,” one ruling stated, “there is no doubt that it is not merely a thing”.

Minallah described in detail the Marghazar animals’ plight. Kaavan’s rocking, he wrote, was an “obvious indication of loneliness, distress and suffering”. The African lions were “visibly malnourished”. The Himalayan brown bears were confined in “extremely small” enclosures, with one in need of “immediate medical assistance” for a botched surgery that had led its chest to become infected.

Finding the zoo incapable of caring properly for its creatures, the judge ordered Kaavan sent to a sanctuary within 30 days and the rest of its 878 mammals, birds and reptiles relocated within 60.

The ruling aroused a public uproar. Some Pakistanis express appreciation and gratitude; others say the judge has brought shame and dishonour to their country. The controversy escalated as plans developed to send Kaavan to Cambodia and the ailing brown bears to Jordan. One member of the Islamabad Wildlife Board called the relocations “a shameful endorsement of international propaganda that Pakistan is incompetent and cruel to animals”.

But the frantic effort to relocate so many beasts led to a gruesome tragedy that seemed to reinforce that image. The two lions were slated to move to a private farm in Lahore, 170 miles away. To force them into a travel cage, two untrained handlers lit a fire in their enclosure, then immediately loaded the terrified pair into a truck. Both soon died of suffocation, stress and smoke inhalation.

Now the lions’ dilapidated cage sits empty, covered with rusty wire and torn cloth. It seems far too small to contain two powerful and lithe creatures, who never left its confines. A nearby sign bears a photograph of two majestic lions in the African wild, and describes them as highly social animals whose “roar may be heard over a great distance at sunrise and sunset”.

The rescue of Kaavan, arranged by the Four Paws International veterinary charity, and the lions’s deaths led some Pakistanis to reflect on why they had long enjoyed visiting the zoo without thinking about how the captive animals lived.

“Pakistan is not a vile place incapable of keeping animals. It’s just that animals have not been on the priority list,” compared to basic problems such as health and education, one reader wrote to Dawn newspaper. Many people didn’t know Kaavan was suffering until he made headlines, Saadia Owais says. “Now that the story has been told, we know that wild animals feel the same pain as we do. They can be as lonely as we feel.”

Pakistan’s Ministry of Climate Change took control of the Marghazar Zoo in early 2020 amid complaints about the conditions. The ministry is now working to reinvent the 82-acre campus as a conservation park with a learning centre for children and open-space living areas for iconic and endangered animals native to Pakistan. It is to be managed and redeveloped through the new Islamabad Wildlife Management Board.

On a warm day in December, Rina Sayeed Khan, the board’s new chair, strolled among the zoo’s empty enclosures and weedy pathways and described the ambitious plans ahead. She paused silently at the lions’ cage, pointed out the concrete water pipe where the Himalayan bears had tried to “hibernate”, and ended up at Kaavan’s empty hangar, still covered with cane dust.

“Finally there is a happy ending to the long and tortuous story of the Islamabad Zoo. It’s over,” she said. “Let’s start afresh and try to do better.”

At the front gate, a towering grey concrete elephant lifted his trunk in welcome, or farewell. Wife of jailed Kremlin critic flies back to Germany

It Takes One to Know One, Putin Fires Back After Biden’s ‘Killer’ Remarks