Speaking at the White House on Monday, Mr Trump said: “Ahhh, we’ll talk about that at another time,” when asked by a reporter whom he believed was responsible for poisoning Mr Navalny.

Mr Navalny collapsed on a flight to Siberia on 20 August after being exposed to the military-grade chemical weapon novichok. He was later flown to a Berlin hospital for treatment and remains in recovery.

German officials have said that laboratory tests in three countries have determined that Mr Navalny, 44, was targetted with chemical, which was used to poison former Russian double agent Sergei Skripal and his daughter, Yulia, in the Salisbury attack of 2018.

Angela Merkel, German chancellor, said Mr Navalny was the victim of attempted murder, adding that the world would look to Russia for answers.

“It was an attempt to silence him. I condemn this in the strongest possible terms on behalf of the entire German government,” Ms Merkel told reporters earlier this month. 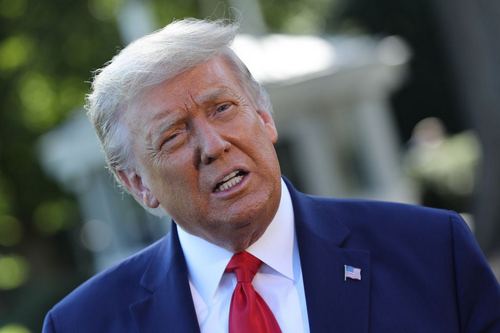 “There are very serious questions now that only the Russian government can answer, and must answer,” she added.

“So I don’t know exactly what happened. I think it’s tragic, it’s terrible, it shouldn’t happen. We haven’t had any proof yet but I will take a look,” he told reporters on 4 September.

“It is interesting that everybody’s always mentioning Russia and I don’t mind you mentioning Russia but I think probably China at this point is a nation that you should be talking about much more so,” he added.

There is currently no evidence to suggest China was responsible for or involved in the attack.

Over the weekend, Mr Navalny published a photograph of himself walking down a flight stairs at the Charite hospital in Berlin where he is receiving treatment.

“There are many problems yet to be solved, but amazing doctors from the Charite hospital have solved the main one,” Mr Navalny wrote in the post on Instagram.

“They turned me from a ‘technically alive human being’ into someone who has high chances to become … a man who can quickly scroll Instagram and understand without thinking where to put his likes.”