Such arguments sound eerily familiar in 2021, as many Americans refuse to wear masks or get vaccinated to stop the spread of Covid-19. Then as now, those opposed to the safety measures see them as violating their personal freedom.

Old news footage of Americans grumbling about seatbelt mandates in the 1980s has found new resonance in the age of Covid.

“There’s no freedom no more,” one Florida driver declares in a decades-old TV clip. “If you don’t want to wear it, that’s your choice!”

In another scene, a Highway Patrol officer lists all the excuses he gets from seatbelt refusers.

“I hear it’s uncomfortable, it wrinkles my clothes, it’s not cool,” he says. 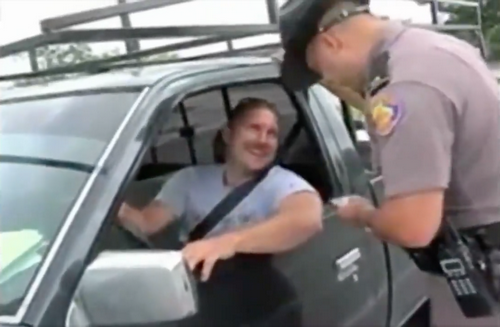 That clash has intensified in recent weeks, as President Joe Biden has unveiled new vaccine mandates affecting tens of millions of American workers. Republican politicians, including many governors, have vowed to resist the orders.

It was in that context that MSNBC host Chris Hayes recently aired an old NBC Nightly News segment from 1984, in which locals in a Michigan town grouse about a new seatbelt ordinance.

“I’ll have to detour the town to get to Kalamazoo, if they passed a seatbelt ordinance,” another says. “I don’t use a seatbelt.”

“Doesn’t all that sound familiar?” he asked. “I feel like I’ve heard that same interview, but about masks and vaccines, maybe even in the state of Michigan – ‘How dare you tell me what to do?’”

On Twitter, where someone reposted the footage, viewers made the same point.

“This rings so true about the vaccine,” one wrote. “Seatbelts save lives and vaccines do too. Why would anyone be against something that saves lives?”

Others disagreed, and found themselves using the exact same arguments as the seatbelt refusers.