The Tories should also “come clean about who else is getting exclusive access to the prime minister and the chancellor in return for cash”, said Anneliese Dodds, the shadow chancellor.

Labour has called on the Conservative Party to return money given by a major donor after the so-called “Pandora papers” linked him to an allegedly corrupt telecoms deal.

Asked to comment on claims made about Mohamed Amersi’s involvement in a deal between Uzbekistan and Telia, a Swedish firm, Boris Johnson said all donations to his party were “vetted in the normal way”. 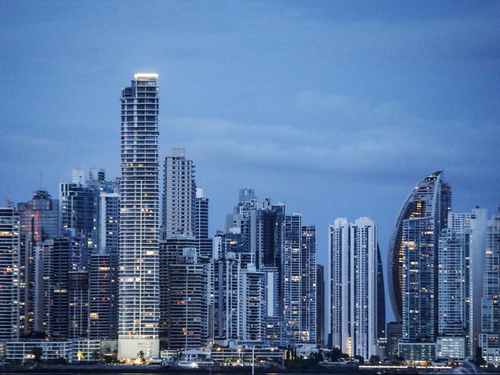 Earlier on Monday Rishi Sunak said HM Revenue and Customs (HMRC) would probe the information revealed the huge trove of leaked documents, which purported to lay bare the financial arrangements of the world’s super-rich and political elite.

The papers described the investments and other financial dealings of hundreds of politicians, celebrities, business leaders and even drug dealers who have used tax avoidance, property deals or other schemes to hide their vast wealth.

The Tony Blair Institute has issued a response to coverage of the purchase by the ex-PM and his wife of a central London property that meant they did not pay stamp duty.

The couple bought the holding company which owned the property.

You can read our story about that here.

In a tweeted statement, the institute said the office premises were acquired from “an offshore company which the Blairs had had nothing to do with”.

It added: “[Cherie Blair] brought it onshore. No stamp duty was payable because it was the sale of a company.

“But capital gains tax – likely to be much more than the stamp duty – will of course be payable when it is resold.

“The allegation that [the Blairs] avoided tax is therefore completely false.

“They have always paid their taxes in full and never used offshore avoidance schemes of any kind.”

Jordan’s King Abdullah II has described his overseas property holdings as neither “unusual nor improper” in response to reports detailing his many expensive homes in the US and UK.

The monarch was named in Pandora papers reports which showed he had luxury homes in California, London and Washington DC worth tens of millions of pounds. The reports did not allege any wrongdoing but contrasted Abdullah’s vast wealth with the conditions in which many of his subjects live.

According to The Guardian the king’s purchases were made through offshore companies located in the British Virgin Islands.

In a statement through the royal court Abdullah said the transactions were kept under the radar for security reasons, and that no public funds were used.

The royal court’s statement said: “It is no secret that His Majesty owns a number of apartments and residences in the United States and the United Kingdom.

“As such, the details pertaining to these properties are made available to the concerned parties when planning both official and private visits and coordinating on security matters.

“These properties are not publicised out of security and privacy concerns, and not out of secrecy or an attempt to hide them, as these reports have claimed. Measures to maintain privacy are crucial for a head of state of His Majesty’s position.

“In addition to privacy requirements, there are critical security considerations that prevent divulging His Majesty’s and his family’s places of residence, particularly in light of heightened security risks.

“To this end, companies were registered in external jurisdictions to manage and administer the properties and to ensure strict compliance with all relevant legal and financial obligations.

“The cost of these properties and all related expenditures have been personally funded by His Majesty.”

The Pandora papers details are an embarrassing blow for the king, whose government was engulfed in scandal this year when his half-brother, former crown prince Hamzah, accused the “ruling system” of corruption and incompetence.

Abdullah responded that he was the victim of a “malicious plot”, placed Hamza under house arrest and put two former close aides on trial.