Russian President Vladimir Putin and Chinese leader Xi Jinping spoke via video link at a summit of the Shanghai Cooperation Organization (SCO), an eight-member group that promotes itself as an antidote to Western geopolitical dominance.

Russia and China’s leaders on Friday urged the new Taliban government in Afghanistan to remain peaceful to its neighbors and combat terrorism and drug trafficking.

Putin said the organization, holding its meeting in Tajikistan, should “use its potential” to “stimulate the new Afghan authorities” in fulfilling their promises on normalizing life and bringing security in Afghanistan.

Partners should work with the new Afghan government, even if it was not representative, the Russian leader added. 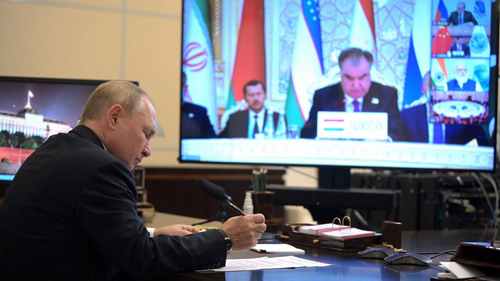 China’s Xi said it was necessary to “encourage Afghanistan to put in place a broad-based and inclusive political framework” and to “resolutely fight all forms of terrorism” and live in peace with its neighbors.

Like Putin, Xi did not attend the summit held in the Tajik capital Dushanbe in person, addressing the meeting by video link instead.

Moscow and Beijing have moved to assert themselves as key players in Central Asia, after the United States’ hasty retreat from Afghanistan and the Taliban’s takeover of the country.

Countries allied with Russia and China were holding a series of meetings in Dushanbe this week.

Summit host Tajikistan has been particularly alarmed by the Taliban’s return to power, with strongman leader Emomali Rakhmon complaining of a buildup of militant groups along its 1,357-kilometer border with Afghanistan.

Rakhmon at the SCO summit called for “a reliable security belt around Afghanistan (to prevent) the potential expansion of terrorist groups.”

Pakistan’s Prime Minister Imran Khan, however, hailed “a rare opportunity to end 40 years of war in Afghanistan,” while also urging the Taliban to ensure representation of all ethnic groups in its government.

Moscow has been cautiously optimistic on the Taliban since it came to power last month after a series of lightning offensives across Afghanistan.

Nevertheless, the Kremlin has said it is in no hurry to recognize Afghanistan’s new authorities and is monitoring their fulfillment of pledges to curb drug trafficking and fight terrorism.

Other founding members of the SCO are former Soviet Central Asian states Kazakhstan, Kyrgyzstan, Kazakhstan, Tajikistan and Uzbekistan. India and Pakistan joined the bloc in 2017.

Iranian Foreign Minister Hossein Amir Hossein Amir-Abdollahian said joining the bloc would have an “important impact” on Tehran’s cooperation with the countries.