Lebanon is in the grips of one of the worst economic collapses in modern history according to the World Bank. A lack of foreign currency has seen crippling fuel shortages causing rolling power cuts and water shortages for millions of people.

Dozens of tanker trucks filled with diesel from Iran have arrived in Lebanon via Syria to combat the country’s unprecedented energy crisis, in a deal struck by militant group Hezbollah that violates US sanctions on Tehran.

Thursday’s convoy of trucks is the first in a series of deliveries organised by the militant group which the US has warned would have “severely damaging consequences” because of the sanctions.

Hezbollah negotiated a supply of the fuel from its patron, Iran, portraying the delivery as a victory.

Videos taken by residents of the Beqaa Valley showed jubilant crowds welcoming the convoy, which reportedly made its way to the eastern city of Baalbek. Some even shot rifles and a rocket-propelled grenade in the air in celebration. Hezbollah’s yellow flags and banners praising the group and Syria’s President Assad decorated the streets. 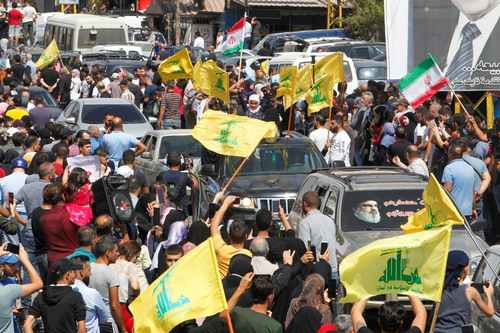 Hezbollah’s Al-Manar TV celebrated it as “breaking the American siege.” It said the trucks were on their way to the eastern Lebanese city of Baalbek where a Hezbollah-linked distribution company will start distributing the fuel.

“This is a very big and great thing for us because we broke the siege of America and foreign countries,” said Nabiha Idriss, a Hezbollah supporter gathered with others to greet the convoy. “We are working with the help of God and our great mother Iran.”

There was no immediate comment from Lebanese or US officials on the Iranian fuel delivery.

The Independent contacted the new energy minister Walid Fayad who said: “This has nothing to do with the ministry.”

The previous energy minister, Raymond Ghajar, said last week that he had received no request for fuel to be imported from Iran – implying Hezbollah had bypassed the state with the move.

Monitoring group TankerTrackers.com reported on Tuesday that an Iranian tanker had discharged its diesel in Syria’s Baniyas port where it was unloaded to Syrian storage places, before being brought to Lebanon.

The first convoy of trucks, each carrying 50,000 litres arrived in Lebanon through an informal border crossing at Al-Qusayr in Syria. Another convoy of tanker trucks is expected on Friday.

Hezbollah’s leader, Hassan Nasrallah, said in a televised speech earlier this week that the tanker did not offload its cargo directly in Lebanon to avoid embarrassing authorities and risking sanctions on Lebanon.

Iran, Syria and Hezbollah are under US sanctions – but Lebanon is not.

Four Democrat senators who visited Lebanon two weeks ago warned that the Iran fuel deal could severely impact relations with the west and that instead of looking to Iran, America would help Lebanon overcome fuel shortages.

Hezbollah has portrayed the Lebanese economic meltdown, which began to bite in late 2019, as partly caused by US sanctions due to the militant group’s power and influence in Lebanon. The group — designated a terrorist organization by Washington — has been sanctioned by consecutive U.S. administrations and in Lebanon has positioned itself as the saviour of the state.

Critics have said it is another sign of the dissolution of the Lebanese state.

Meanwhile, Iranian authorities have had to fend off criticism that they treat the Lebanese better than their own people.

“Gasoline is many times more expensive for the Iranian people and free for Hezbollah in Lebanon,” a Twitter user said last month. “Hassan Nasrallah, Secretary General of the Lebanese Hezbollah Group, proudly announced that a fuel tanker carrying Iranian donated gasoline will be loaded from Iran in a few hours and other shipments will be sent to this country in the future.”

Lebanon’s economic woes have been made worse by the fact it had no government for a year after the country’s cabinet resigned in the wake of an enormous blast in August in Beirut.

The European Union have since threatened to impose sanctions on Lebanese politicians who block the progress of a new government and the reforms it needs to impose.

On  Thursday the EU’s parliament called on the EU to still consider the sanctions calling Lebanon’s crisis a man-made disaster.