Henry said the referendum is a priority because the current constitution is rejected by a majority of political figures and civil society leaders. He also said an electoral council that will be responsible for setting dates has yet to be named after he recently dissolved the previous provisional council.

“The elections must be held as soon as possible,” he said as he lamented the lack of trust among Haitians. “People don’t believe what is being said.”

Haiti’s prime minister said Tuesday that he plans to hold a referendum to modify the country’s constitution by February, and he hopes to organize presidential and legislative elections early next year.

In an interview with The Associated Press, Ariel Henry dismissed opponents who accuse him of wanting to stay in power and said that mistrust is one of the biggest challenges he faces.

After being postponed several times this year, presidential and legislative elections were scheduled to be held Nov. 7, along with the constitutional referendum. But the assassination of President Jovenel Moïse at his private home on July 7 upended those plans. 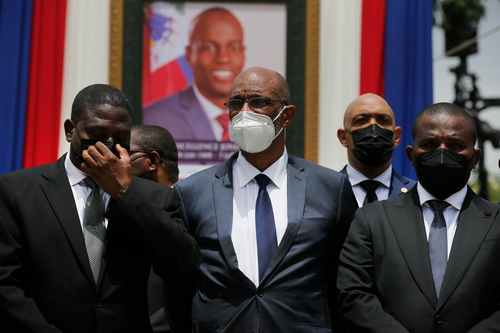 Henry also criticized how the U.S. government recently treated Haitian migrants along the U.S.-Mexico border, where it expelled more than 2,300. He said that action was not “suitable.”

“We don’t understand the way that our compatriots were treated,” he said.

Henry’s comments came just hours before the arrival in Port-au-Prince of Assistant Secretary of State Brian Nichols, the top U.S. diplomat to Latin America who is seeking to contain the fallout from the abrupt resignation last week of the U.S. special envoy to Haiti.

Daniel Foote, a career diplomat, quit the high-profile post over the deportations at the border, saying it was inhumane to return the migrants, many of whom fled the island following the devastating 2010 earthquake, to a country buffeted by gang violence, a collapsed economy and political turmoil.

Foote, in his resignation letter, also criticized the U.S. for standing by what he considers a “corrupt government with gang alliances” instead of embracing a broad-based coalition of civil society groups that have come up with their own blueprint for stabilizing the country.

Henry declined to comment on Foote’s resignation, saying it was a foreign affair, but he said he does not think the situation will affect the relationship between the U.S. and Haiti, which he said would continue and deepen.

Henry added that the government is working on a draft of a potential program to help the thousands of migrants who have been expelled. He said one proposal is to give the migrants access to credit so they can launch their own small businesses.

“We’re trying to do that immediately,” he said.

Another priority is to find the masterminds behind Moïse’s killing. Henry said he does not know why the president was slain. He also dismissed allegations made by a chief prosecutor — whom he fired — that there were two phone calls between him and a key suspect just hours after the assassination.

Henry said he has no recollection of speaking with Joseph Badio, who was fired from the government’s anti-corruption unit in May and remains a fugitive, according to police, who seek him on charges including murder.

Henry said he dismissed Port-au-Prince’s chief prosecutor, Bed-Ford Claude, and former Justice Minister Rockfeller Vincent, because they did not respect the law and tried to politicize the situation.

“They don’t have any ethics, and they are not credible,” he said.