It has been reported that Mr Sefcovic will table four papers on Wednesday to improve the Northern Ireland Protocol, with measures to address the availability of UK-approved medicines and inspections on meat, diary and plant products.

The EU is expected to lift a ban on sausages made in Britain being sold in Northern Ireland as part of proposals to improve post-Brexit trading arrangements, with plans to “dramatically” reduce the level of checks on goods, according to reports.

The proposals are expected to include a “national identity” exemption for British sausages from EU rules on prepared meat, according to The Guardian, ending a long-running dispute between Brussels and the UK government. 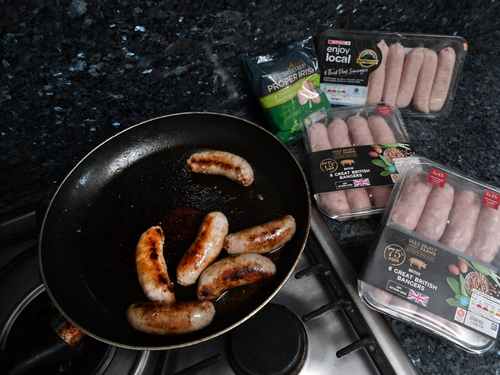 Senior EU sources also told Euronews on Friday that the commission was preparing to announce a “bespoke” arrangement for Northern Ireland, which remains in the bloc’s single market for goods, to prevent a hard land border with Ireland.

“We obviously can’t get rid of all checks; we need to protect the single market, so surveillance will still apply but we hope to simplify a lot of this,” a source told the news network.

Boris Johnson has previously said that he would do “whatever it takes” to stop the ban on exports of sausages and other meat products from mainland Britain, suggesting that he could attempt to suspend the protocol over the issue.

The reports on Friday came as Ireland’s premier Micheal Martin insisted that the UK and EU were in “solution mode” over the problems arising from the post-Brexit trade arrangements.

Mr Martin was in Belfast to hold talks with Northern Ireland’s political leaders over the implementation of the protocol, which he noted was an issue of “genuine concern” for people.

“They do need resolution,” the Irish leader told reporters, adding that Mr Sefcovic was “really applying himself” to the matter.

“I am in no doubt that the European Union is in solution mode and will be coming forward with proposals in relation to this issue.”

He added: “The United Kingdom government are signalling that they’re solution-focused as well.

“So, there is a window of opportunity over the next six weeks to two months to try and get these issues resolved to the mutual satisfaction of all, so that we can make the protocol work operationally for the benefit of the people of Northern Ireland.”