In a rare act, all 10 living former defence secretaries have warned Donald Trump against dragging the military into “election disputes” in a letter published on Sunday.

“Efforts to involve the US armed forces in resolving election disputes would take us into dangerous, unlawful and unconstitutional territory,” the group wrote in The Washington Post.

The letter is signed by officials from both Democratic and Republican administrations – with prominent figures being former vice president Dick Cheney, Pentagon chiefs under Mr Trump, Jim Mattis and Mark Esper.

The group said there is no sympathy for Mr Trump’s attempt to reverse the election results. “The time for questioning the results has passed; the time for the formal counting of the electoral college votes, as prescribed in the Constitution and statute, has arrived,” the group wrote. 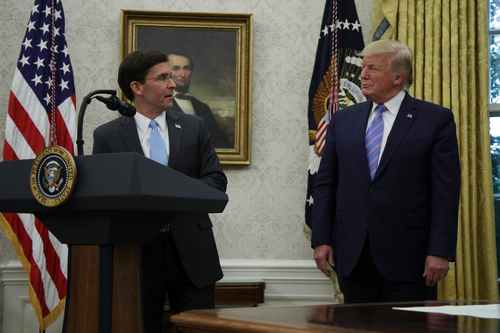 The denunciation by the prominent group of people comes as Congress is set to certify the Electoral College results on Wednesday and Mr Trump along with his supporters continue to press baseless claim of widespread voter fraud. Having failed to win several lawsuits in courts, Trump allies have showed support for the idea of deploying the military and declaring martial law in an attempt to hold on to power.

A report in The New York Times in December by David Ignatius said Mr Trump was mulling if he could use the military to intervene in the matter and sought suggestion from his aides. It said that military officials are worried that Mr Trump’s hand-picked Pentagon leaders could sympathise with him and assist him by overstepping the law.

The defence secretaries wrote in the op-ed that transfers of power “often occur at times of international uncertainty about US national security policy and posture,” without giving any specific example. “They can be a moment when the nation is vulnerable to actions by adversaries seeking to take advantage of the situation,” it added.

The group concluded their letter urging the defence department to “refrain from any political actions” that could hamper the transition to a Joe Biden administration or undermine the election results.

“We call upon them, in the strongest terms, to do as so many generations of Americans have done before them,” they wrote.

“This final action is in keeping with the highest traditions and professionalism of the US armed forces, and the history of democratic transition in our great country.”

Neighbour blasts racial slurs at Black family, but police say there’s nothing they can do