Ninety-six per cent of Democrats, 73 per cent of independent voters, and 51 per cent of Republicans said that the power should be with school districts in the fight against Covid-19 to determine whether masks should be mandated for students attending in-person classes.

A new poll finds that a wide majority of Floridians oppose efforts by the state’s Republican governor, Ron DeSantis, to punish school districts that mandate mask-wearing for students.

In a survey of 753 likely voters in the state conducted by Data for Progress, a left-leaning polling firm, the support for school districts charting their own course was widespread and bipartisan.

Florida has become a battleground over efforts to control the coronavirus pandemic. Mr DeSantis has gone further than most GOP officials in the country and banned local officials from mandating the use of masks in schools, a move that he has continued to defend while more and more younger Americans have developed Covid-19 infections. 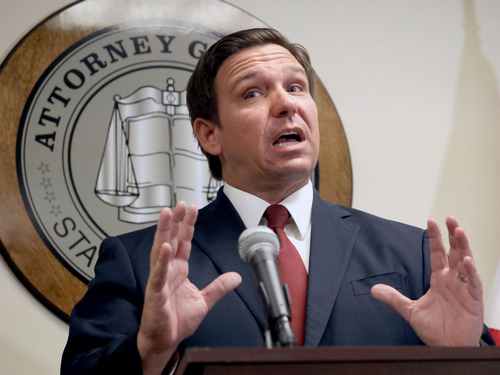 In the same poll, half of likely voters who responded said that they supported a mask mandate being expanded to all indoor spaces in the state, an idea that Mr DeSantis is firmly opposed to.

The Delta variant of Covid-19 is ravaging Florida. Nearly 2,500 Floridians died from the disease over the past week as the state hopes it is reaching a plateau during the worst surge of Covid-19 yet.

Mr DeSantis, who is thought to have national political ambitions, has made a name for himself among conservatives as a crusader against mask mandates and efforts by the Biden administration to bring the virus outbreak under control.

Just days ago the governor tweeted that he would “continue to fight for parents’ rights” after an appeals court restored his ban on mask mandates in schools.