Such a deal could push already fraying relations between Paris and Mali to breaking point, and underscore a growing Russian influence in a region where former colonial power France has been the unrivaled foreign presence.

Mali’s military junta is in talks with Russian private security group Wagner to hire up to a thousand mercenaries in the West African country, two French sources said on Tuesday.

One source close to the French presidency, and another in the security services, confirmed the talks were under way, while asking for anonymity because they were not authorized to speak to the media.

A spokesperson for the Malian defense ministry did not deny the discussions, which were first reported by Reuters on Monday.

“Mali intends to diversify its relationships in the medium term to ensure the security of the country,” the spokesperson told AFP. “We haven’t signed anything with Wagner, but we are talking with everyone.” 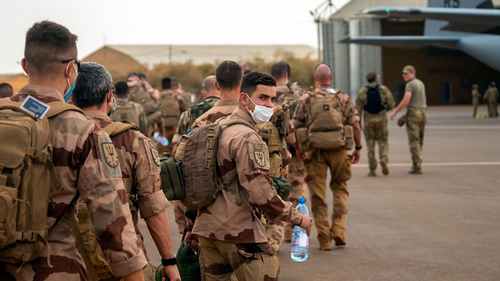 Since 2013, France has deployed thousands of troops as well as air power to Mali and the wider Sahel region, where they carry out operations alongside local forces against Islamist rebels linked to Al-Qaeda and the Islamic State.

Relations between France and the military regime in Bamako have deteriorated since a coup in August 2020 toppled President Ibrahim Boubacar Keita.

French President Emmanuel Macron has been angered by backsliding on commitments to hold new elections, as well as decisions to free imprisoned jihadists in exchange for hostages.

France suspended military cooperation with Mali last June, and Macron has announced plans to close bases in northern Mali and draw down the presence of French troops in the region.

The presence of Russian mercenaries would be a “red line” for Macron, one of the French sources said, which could lead Paris to send troops stationed in Mali to neighboring Niger.

A diplomat in the Russian Embassy in Mali told AFP that “we are not aware of any contract being signed between Mali and Wagner” and that the embassy had “not been the intermediary.”

“Like France and other countries, we are worried about security in the region,” the diplomat said.

Through close diplomatic and security ties, Russian companies have gained concessions in the CAR’s mining sector.

One of the French sources said the deal under discussion between Wagner and Mali would involve Russian access to mining rights.

In the CAR, France and NGOs have denounced the role played by mercenaries from Wagner, which is allegedly headed by Yevgeny Prigozhin, a businessman close to Russian President Vladimir Putin.

Prigozhin, who has been sanctioned by both the EU and the U.S., has denied links to Wagner and any role in conflicts in Africa.