Hospitalizations are up 15% compared to the previous week and new infections have risen by 24%, according to Moscow’s deputy mayor and Covid-19 response center chief Anastasia Rakova.

Moscow’s coronavirus hospitalizations have shot up in the past week, authorities said Wednesday after the Russian capital held three-day parliamentary and local assembly elections.

The Delta variant accounted for 100% of all new infections, she added.

Observers were quick to speculate that the uptick in Covid-19 cases was linked to the authorities’ need to doctor the figures ahead of the vote in order to boost turnout among voters who may have otherwise stayed away from the polls. 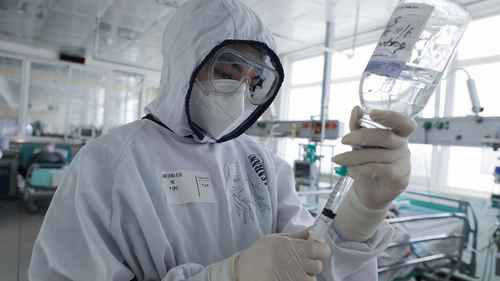 The ruling, pro-Putin United Russia party maintained its supermajority in the Sept. 17-19 elections to the lower house of parliament, according to preliminary results of the vote that Kremlin critics and Western governments dismissed as fraudulent.

Officials spread the voting period over three days, citing a need to prevent Covid-19 transmissions at the polls, but independent monitors warned that extending the vote would open a door to rampant election violations.

The hospitalization figures also come amid reporting by the Meduza news outlet that the Moscow Mayor’s Office recently met to discuss reintroducing remote work, QR codes for restaurant diners and self-isolation for the elderly and the chronically sick in preparation for a fourth wave of the pandemic.

Earlier this week, the head of Russia’s health watchdog warned of “serious” growth in new infections in 36 of Russia’s 85 regions.

At least six Russian regions have started reimposing Covid-19 restrictions shortly after the three-day polls wrapped up, according to Mozhem Obyasnit, an investigative outlet that previously operated as Open Media until authorities declared it a “foreign agent” and blocked its website.