Veterans of state security agencies and military school cadets attended the unveiling ceremony in central Simferopol, according to Crimean media. In neighboring Krasnodar, the ceremony on the grounds of a school named after Dzerzhinsky in 2017 was attended by senior Federal Security Service (FSB) leadership, local deputies and Dzerzhinsky’s great-grandson.

“Today’s opening is a significant event for the Dzerzhinsky family [and] veterans of the security agencies,” said Vladimir Dzerzhinsky. “I’d like to wish that my great-grandfather’s legacy is studied as much as possible and learned from his works.”

The busts of Felix Dzerzhinsky in the Russian city of Krasnodar and the Crimean city of Simferopol were unveiled on Sept. 11, his 144th birthday. 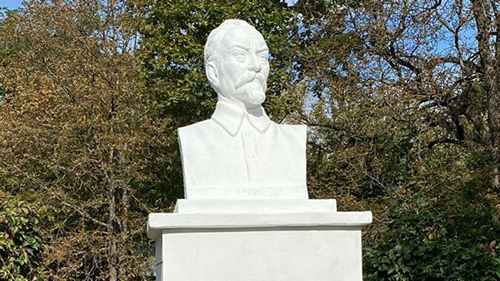 The FSB’s Crimean branch credited Dzerzhinsky with “not only fighting against the counter-revolution, but also raising the country from ruin and poverty.”

“Thanks to his participation, 2,000 bridges were restored, almost 3,000 steam locomotives and more than 10,000 kilometers of railway tracks were repaired,” it was quoted as saying.

Reactions to the unveilings reflect a deep split in Russian attitudes toward its Soviet past.

The Russian Orthodox Church, which Soviet leaders attempted to stamp out during their rule, condemned the appearance of Dzerzhinsky monuments “in any public spaces in Russia.”

Archpriest Leonid Kalinin, the chair of the Church’s council on art, architecture and restoration, said the statue “offends the memory of millions of innocent victims of terror, hunger, cold, torment, torture, prisons, camps and the ruin of the Fatherland.”

In comments to the Govorit Moskva radio station, Kalinin expressed the opinion that local residents “who still harbor the memory of those terrible decades” will take down the Dzerzhinsky busts.

The Moscow monument to “Iron Felix” now stands in an open-air park after it was removed from the KGB headquarters with the fall of the Soviet Union in 1991.

Early this year, a Moscow city vote on whether to restore a statue of Dzerzhinsky to its former location in front of the present-day FSB headquarters was scrapped after it drew negative reactions from the public.

Residents had been offered a choice between Dzerzhinsky’s statue or one of legendary medieval prince Alexander Nevsky, a 50-ton monument of whom was unveiled by President Vladimir Putin and Patriarch Kirill on the northwestern border with EU member Estonia this weekend.