Established in 1993, Novaya Gazeta gained a reputation for hard-hitting journalism on topics including the 2014 downing of flight MH17 and the 2016 Panama Papers leaks into offshore dealings.

The paper continued its intrepid work despite the killings of six of its journalists, most notably Anna Politkovskaya in 2006, and threats and harassment of its reporters over the years.

Nobel Peace Prize winner Dmitry Muratov credited the independent Russian newspaper Novaya Gazeta, where he has served as editor-in-chief for over two decades, for the prestigious award on Friday.

“I can’t take credit for this. This is Novaya Gazeta’s,” Muratov said after the Norwegian Nobel Committee awarded him and prominent journalist from the Philippines, Maria Ressa, the 2021 Peace Prize. 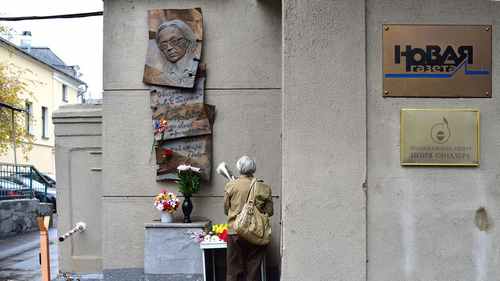 Here’s a look at some of Novaya Gazeta’s major investigative reports in recent years, both under Muratov’s leadership and otherwise:

Novaya Gazeta broke the news in 2017 on the alleged torture and killings of people in southern Russia’s republic of Chechnya who are suspected of being gay. Its reporting has raised international awareness of Chechnya’s alleged anti-gay purges, leading to international legal action brought outside Russian borders.

Chechen security officers had also rounded up civilians and summarily executed them in sweeping anti-terror raids around the same time as the gay purges of 2017, Novaya Gazeta reported this year, citing an ex-policeman’s testimony.

That report prompted officials in Chechnya, which Kadyrov has ruled with a degree of autonomy in exchange for loyalty to Moscow following two devastating separatist wars in the 1990s, to call for Novaya Gazeta’s closure.

Novaya Gazeta linked Russian mercenaries to the gruesome beheading, dismembering and immolation of a Syrian detainee in 2017.

The publication withheld the identities of the fighters, believed to be mercenaries for Kremlin-linked private military contractor the Wagner Group, but said it stood ready to provide its materials to Russian law enforcement if they wanted to investigate the torture.

The Kremlin has said the footage of the cold-blooded beheading had nothing to do with Russia’s military operations in Syria. Private military companies are illegal in Russia — a technicality that the Kremlin has used to deny Wagner’s reported presence in Syria, Ukraine, Libya, Sudan and other conflict-torn countries.

The article, which cited interviews with a former Prigozhin associate who has since disappeared, was published days after unknown individuals sent its author, Novaya Gazeta reporter Denis Korotkov, a funeral wreath and a severed goat’s head.

Novaya Gazeta finally succeeded in triggering an investigation and a nationwide inspection after it published body cam footage from 2016-17 of prison guards torturing an inmate in the city of Yaroslavl northeast of Moscow.

After the shocking footage put a national spotlight on the issue of prisoner abuse in Russia, the publication followed up with new videos of abuse two years later.