On 27 January, the military signed an order to vaccinate the base’s 40 remaining inmates on a voluntary basis, the New York Post and New York Times reported, in part because a lack of vaccination was slowing the prison’s already glacial pace of military trials for  detainees.

The Pentagon said on Saturday it is pausing a plan to offer the Covid-19 vaccine to prisoners at the Guantánamo Bay detention facility, a group that includes 9/11 planner Khalid Sheikh Mohammed, following an outcry among top Republicans and New Yorkers who experienced the attacks.

“We’re pausing the plan to move forward, as we review force protection protocols,” Assistant Secretary of Defense for Public Affairs John Kirby wrote in a tweet on Saturday. “We remain committed to our obligations to keep our troops safe.”

News that accused terrorists were getting the vaccine before many Americans outraged prominent Republicans like House Minority Leader Kevin McCarthy.

“President Biden told us he would have a plan to defeat the virus on day 1,” he wrote on Twitter on Saturday. “He just never told us that it would be to give the vaccine to terrorists before most Americans.” 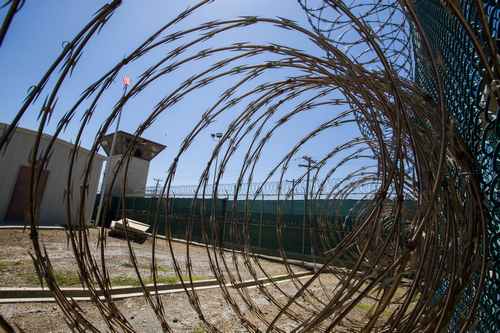 The move also rankled some of those on the ground in New York the day of the 2001 attack on the Twin Towers.

“The ridiculousness of what we get from our government,” Tom Von Essen, New York’s fire commissioner during 9/11, told the New York Post. “They will run the vaccine down to those lowlifes at Guantanamo Bay before every resident of the United States of America gets it is the theater of the absurd.”

The military began vaccinating the 6,000 residents of the base at the beginning of the month, including the 1,500 troops assigned to the detention center. It’s unknown how many at Guantánamo, detainee and otherwise, have contracted Covid, after the Pentagon in March prohibited commanders from publicly reporting new cases out of security concerns. The Trump administration previously declined to comment on whether prisoners were getting the coronavirus jab.

Vaccination was a major hurdle ahead of a 22 February arraignment for three prisoners accused of conspiring in deadly terror attacks in Indonesia in 2002 and 2003, which would’ve been the first arraignment since 2014.

The Obama administration tried and failed to shut down the $445 million-a-year facility, but was blocked by Congress from transferring prisoners to the mainland US to face trial in federal court, so resorted to reviewing the cases of those deemed unnecessary for detention and releasing them.

During the Trump years, the president essential stopped these reviews, and the office responsible for resettling them closed down.

The facility once held around 700 people at its peak but is now down to 40 detainees, including who were cleared for release but languish inside the facility anyway.

The others, including the 9/11 plotters, who still await trials, face a process that has often moved extremely slowly, thanks to years of appeals, constantly changing judges, efforts to exclude evidence obtained by torture, and incursions from federal authorities included secret listening devices in attorney-client meeting rooms and FBI informants within defense teams. Some have remained at the facility longer than they would’ve been in prison if convicted on terrorism charges.

The Biden administration’s secretary of defense Lloyd Austin has said he would follow through on former president Obama’s promises to shutter the controversial facility, which critics argue violates international law against torture and indefinite detention.