Voting is open across Russia’s 11 time zones to elect the 450 members of the country’s lower chamber of parliament, the State Duma.

16.45 Some 14 protestors have been detained during Russia’s second day of voting, according to the independent OVD-Info monitor. They include activists protesting in support of jailed Kremlin critic Alexei Navalny and an anti-Putin Shaman from Siberia as well as a former regional coordinator for Navalny’s now-banned political organization in St. Petersburg who was monitoring the vote.

“If you do not remove the files, Google may be forced to block access to them,” the email, shared by Navalny’s team on his Telegram channel, stated. Google on Friday deleted Navalny’s app from its app store under pressure from the Kremlin. The documents in question are a full list of candidates being backed by Navalny’s Smart Voting system, a tactical voting initiative designed to oust lawmakers from the pro-Kremlin United Russia party.

13.00 Russia’s Central Elections Commission said that it had “recorded three targeted cyberattacks from abroad,” against Russia’s electoral system and its website during voting Friday. It added that further attacks were expected, but did not state which countries it believes were involved. 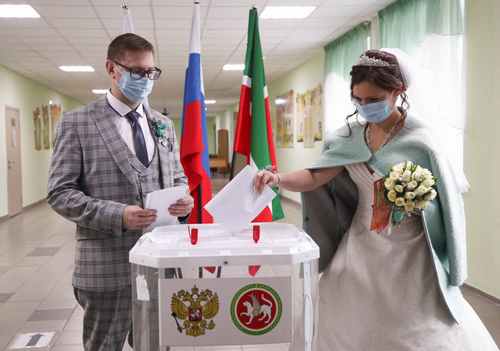 12.30 There are fewer reports of crowded polling stations Saturday, but incidents of reported violations continue to come in. In St. Petersburg, a man was detained after he was caught attempting to put around a dozen voting slips, backing the ruling United Russia party, into the ballot box, Novaya Gazeta reported. A video from Samara, shared by vote monitors from the liberal opposition Yabloko party, shows a near-empty polling station all morning, while the official vote tally for the district registered some 1,600 ballots cast Saturday.

Another video showed pens with ink that rubs out being used in polling stations and ballot boxes with secret doors and unsealable seals.

Observers at a Moscow polling place find a pen with disappearing ink, a seal that peels right off & a safe of ballots with a secret back door 🤡 https://t.co/VbhI9qfBH4

10.00 The independent election monitoring NGO Golos recorded 2,130 possible voting infringements at polling stations Friday. Some 382 were in Moscow and another 171 in St. Petersburg, Novaya Gazeta reported.

08.00: Voting has resumed in Moscow on the second day of Russia’s 2021 State Duma Elections.

00.30: Telegram founder Pavel Durov said on Friday evening that the instant messenger is suspending support for all “bots associated with election campaigning” during Russia’s parliamentary election in what appears to be a blow to Navalny’s “Smart Voting” stategy.

20.00: As polls close in Moscow on the first of three voting days, the official turnout stands at 16.85%, according to Russia’s Central Election Commission.

19.00: Reports of suspected election fraud have been circulating on social media throughout the day. This video from St. Petersburg appears to show a ballot box being stuffed with ballot papers, a practice used in previous elections in the country.

18.10: A raccoon was spotted running around one of the polling stations in Moscow, reportedly let loose by its owner when he was casting his vote. It took officials seven minutes to catch the animal, local media said.

16.40: President Vladimir Putin, who is self-isolating after being exposed to Covid-19 in his inner circle, has voted online in the country’s parliamentary elections from his residence outside Moscow, the Kremlin announced on Friday

16.00: Russia’s three-day voting periods are likely here to stay, the head of the country’s Central Election Commission (CEC) said, a move that critics warn will make it easier to commit voter fraud.

15.20: Over 40% of Muscovites that applied for electronic voting have already voted, the Central Election Committee has said. 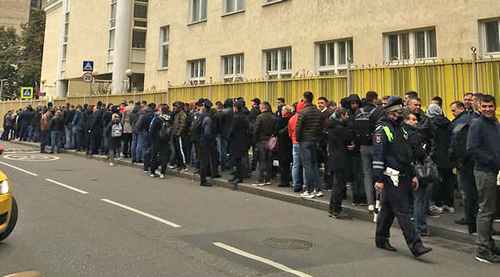 11.06: Social images on Friday morning showed long queues of people outside voting stations in cities across Russia. A source close to the government told the independent news outlet Meduza that many state employees were told to cast their vote before 12 p.m. on Friday. Critics say Russian elections have a long history of voter intimidation at work, especially in the bloated public sector, which accounts for a third of jobs in Russia. A recent poll published by the state-funded VTsIOM polling agency said 14% of all employers working at industrial plants in Russia had been confronted with forced voting for the upcoming elections 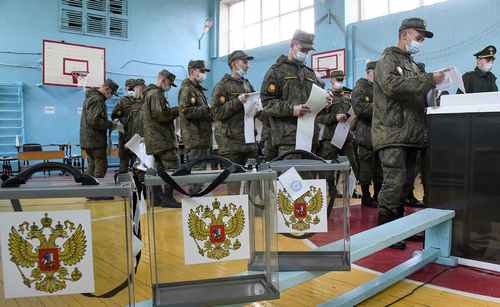 Servicemen vote in the 2021 Russian parliamentary election in the village of Peschanka, Transbaikal Territory. 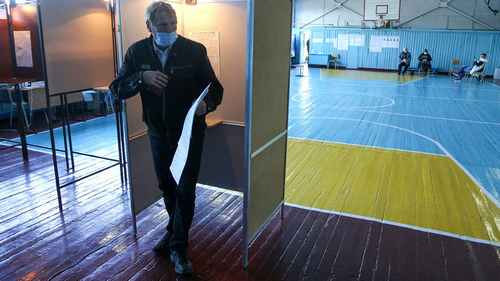 10.20: Over 10% of Russians that applied for electronic voting have already voted, the Ministry of Digital Science said.

08.01: Polling stations have opened in Russia’s regions that belong to the Moscow time zone. Moscow residents will be able to vote online.

GOP’s loyalty to Trump has has the party in a ‘death spiral’, says former US cybersecurity chief