The Chelyabinsk Central Court in west-central Russia found the two guilty of hooliganism based on political hatred and enmity, sentencing Tsibukovsky to 2.5 years in prison and Safonova to 2 years, Chikov said, citing the couple’s lawyers.

Dmitry Tsibukovsky and his wife Anastasia Safonova were detained in 2018 after hanging a banner that read “The FSB is the main terrorist” on the fence of the Chelyabinsk regional Federal Security Service (FSB) headquarters. The act was in support of members of the Set’ (“Network”) anti-fascist activist group who were jailed on terrorism charges that rights groups condemned as fabricated.

Prosecutors had requested six-year sentences for both activists.

In 2018, Tsibukovsky told the independent OVD-Info police monitor that he had been beaten and tortured in the regional FSB building.

“In the process, they explained that they wanted to hear me confess to hanging the banner on the FSB building,” he said.

The case had previously been dropped twice for lack of corpus delicti, but was resumed.

Russia’s foreign ministry said Friday it summoned the US ambassador in Moscow over the interference of US tech giants in elections in Russia, which is set to hold parliamentary polls later this month.

Russia has recently ramped up control of its segment of the internet and has been taking legal action against foreign tech companies for not deleting content banned by authorities. 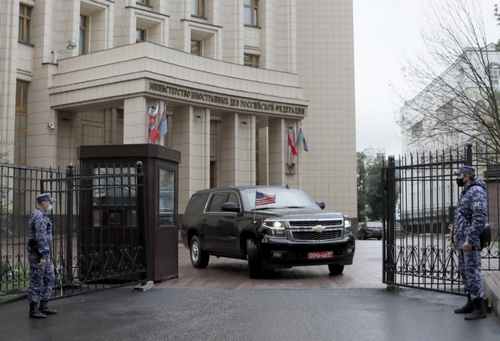 “There is one reason — interference in Russian elections. We hope this is how American diplomats will report it to Washington,” ministry spokeswoman Maria Zakharova said on Telegram.

It added that Sullivan was presented with “irrefutable proof” of US tech giants violating Russian laws in the context of the upcoming elections to the lower house State Duma.

The ministry also said that it conveyed the “categorical inadmissibility of interference in the domestic affairs of our countries.”

Tensions are high between Moscow and Washington over a range of issues, including claims of meddling in US elections and Russia’s human rights record.

In May, Russia formally designated the United States an “unfriendly” state, barring its embassy from employing Russian nationals.