Women of all ages lined up along Old Arbat Street, a pedestrian tourist strip in the shadow of the Foreign Ministry, holding onto a long white ribbon. The White Counter crowd-monitoring NGO estimated that at least 230 showed up to protest.

In a nod to the red dress Navalnaya wore in court as her husband was sentenced to nearly three years in prison on Feb. 2, protesters held red roses, wore red scarves and hats and pinned red paper hearts to their jackets.

The Valentine’s Day demonstration follows weeks of harsh police crackdowns at pro-Navalny protests and was inspired by last summer’s protests in neighboring Belarus, where women formed human chains after thousands were beaten and detained.

Standing in front of a snow-covered statue of poet Alexander Pushkin and his wife Natalia in temperatures of minus 15 degrees Celsius, they chanted slogans like “Love is stronger than fear” and “Freedom for political prisoners.”

“It is painful to see that protesters were beaten and arrested for doing nothing and that the government is instilling fear into us,” said Oksana Klochkova, 28, a Navalny supporter who also attended the recent protests that called for his release and criticized President Vladimir Putin.

Some held up photos of women facing prison for their activism, including Anastasia Shevchenko, who could serve five years for her involvement with Open Russia, a pro-democracy group labeled an “undesirable” organization by the government.

Navalny’s detention and imprisonment after returning from Germany, where he had been recovering from poisoning with Novichok, sparked mass protests nationwide on Jan. 23, Jan. 31 and Feb. 2 that saw more than 10,000 detained.

Despite the “chain of solidarity” not being authorized, police presence was nonexistent compared with the earlier pro-Navalny protests, where hundreds of heavily armored riot police were deployed to suppress demonstrations.

Many of the women present Sunday had attended those protests and seen their friends detained. Others, like 68-year-old Albina, were motivated to protest for the first time after seeing the crackdown on peaceful protesters.

“Many of my acquaintances were arrested,” said Katya, 19, who attended the Jan. 23 rally. “Some were sentenced and others fined even though they didn’t violate social order, they didn’t scream, they were just standing together with everyone else. … I am here to show that we are many, we are one and we can change something.”

A similar chain of solidarity took place in St. Petersburg with about 70 protesters, according to local news reports.

Moscow’s event wasn’t without its hecklers, including two men wearing mock NATO helmets and carrying inflatable machine guns and activists from a nationalist group. Since Navalny’s August 2020 poisoning, the Kremlin and state media have accused him of being a western puppet aiming to “destabilize” Russia from within.

The women-led “chain of solidarity” came hours ahead of protests called by Navalny’s team asking supporters to hold up cellphone flashlights in residential courtyards. The new tactic is an effort to avoid direct confrontations with riot police which had discouraged many from taking part in new protests.

Klochkova said she sees these Belarus-style protest tactics as the best path forward for the opposition now that Navalny has been imprisoned.

“I think the recent protest trend is showing that more and more people are interested in politics and are getting involved,” she said.

When asked whether she was afraid to take to the streets again following the crackdown, Klochkova said she hasn’t felt afraid “for a long time.”

“If we allow fear to take over, then the government will crush us. We must fight for our freedom because it won’t just be handed to us.” 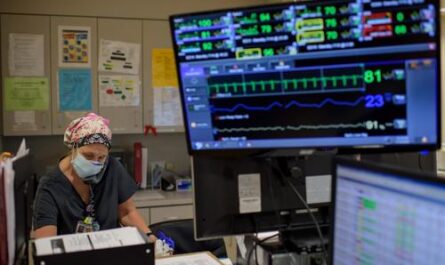