Named for the suburb where Josef Stalin had his dacha, the district is one of 225 that collectively elect half the members of Russia’s lower house of parliament, the State Duma. It runs through the capital’s middle-class, opposition-minded west, stretching from the New Arbat shopping thoroughfare to Moscow State University.

If there’s one district Russia’s beleaguered opposition should be able to win in Sunday’s parliamentary elections, it’s Moscow’s 197th, Kuntsevsky.

For many of the district’s voters, the point of the upcoming vote is more about ensuring the ruling United Russia party loses than handing any one candidate a win. But entrenched and bitter divisions between the opposition parties will make this a tough task.

“I’ll vote for whoever can beat United Russia,” said physics student Alexei Lyashenko, 26, who has been weighing up whether a communist candidate, or one from the liberal Yabloko party is best placed to win his home district.

“I’m very worried that with so many strong opposition candidates splitting the vote, United Russia might get in again.”

Smart Voting — the strategy of coalescing anti-Kremlin voters around the most viable anti-United Russia candidate — is the foundation of jailed Kremlin critic Alexei Navalny’s call to action. Moscow’s 15 districts, where polling shows the ruling party is deeply unpopular, give the opposition the chance to flex its muscles after a bruising year of protests and crackdown.

The Navalny team has said that Smart Voting recommendations will only be released immediately before polls open, when candidates can no longer drop out, to prevent the authorities from removing Navalny-backed candidates.

In the last Duma election in 2016, United Russia scraped a win in Kuntsevsky with barely 29% of the vote, as Yabloko and the Communists took half as much each.

With the same two opposition parties again mounting strong plays for the district, there are signs that another split vote could let United Russia candidate Yevgeny Popov, a TV host on a combative, pro-Kremlin prime time talk show, retain its Duma seat.

On an unseasonably cold September night, at a joint rally against a road building project in the leafy suburban district of Ramenki, the two anti-Kremlin camps were outwardly friendly, but willingness to compromise was in short supply.

“There’s absolutely no way I’m pulling out of the race,” Kirill Goncharov, the 29-year-old Yabloko candidate, told The Moscow Times on the sidelines of the protest, which drew around 200 people.

“The Communists voted for every single one of the new, repressive laws in the Duma. How could I support them?”

But for Communist candidate Mikhail Lobanov — a 38-year-old Moscow State University mathematics professor and self-described “democratic socialist” who counts U.S. Senator Bernie Sanders among his political inspirations — only one campaign has a shot at victory.

“The best thing Kirill could do is to wait until the last day before ballots are printed and then pull out,” said Lobanov.

“In favor of me, obviously.”

Even among those whose political leanings appear, on the surface, to be closely aligned, factionalism reigns supreme.

Far from a unified movement, Russian democrats — divided into a patchwork of squabbling camps drawn from the cliquish world of Moscow opposition politics — have often been their own worst enemy.

At election times, a series of democratically minded groups, from Navalny supporters through Yeltsin-era liberal party Yabloko to exiled oligarch Mikhail Khodorkovsky’s Open Russia movement, compete for the same voters, often while feuding with each other.

In Moscow, Russia’s most opposition-leaning city, this infighting saw United Russia win every district it contested in 2016, often on vote shares of 30% or less, as anti-Putin votes split in multiple directions.

Though Navalny had previously imposed a superficial unity on the anti-Kremlin movement, thanks to his national profile, his jailing earlier this year and the effective destruction of his organization has left only an exiled rump attempting to coordinate Smart Voting from outside Russia.

In central Moscow’s 208th District, which fans out around the Kremlin, no fewer than six opposition candidates are facing off for Russia’s most anti-Putin seat, with most competing for the Smart Voting nod.

The confusion is heightened by an almost total lack of reliable polling, which under-resourced opposition campaigns cannot afford.

Instead, voters and campaign teams can only trade hearsay and accusations about which candidates have shots at winning, and which are falling flat.

Amid the continued bickering, Latvia-based news site Meduza has reported that United Russia strategists believe a sweep of all Moscow’s districts is within their reach. 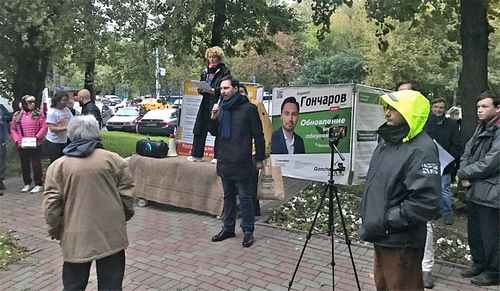 Nowhere is the opposition family feuding more bitter than in the capital’s 198th Leningradsky District.

Centered on north-west Moscow’s wealthy, liberal suburbs, the seat is so opposition-leaning that United Russia tends not to contest it, instead giving a candidate from the tame, parliamentary opposition a free run.

The Yabloko candidate, prominent human rights activist Marina Litvinovich, 46, should have had a decent chance of winning the seat, where the liberal party took second place in 2016.

But when 28-year-old municipal deputy Anastasia Bryukhanova unexpectedly made the ballot, the old specter of split votes reared its head again.

Bryukhanova, who was expelled from Yabloko for factionalism last year, and her campaign manager Maxim Katz, who has been expelled from both Yabloko and the Navalny movement, have called on Litvinovich to withdraw from the race in a bid to solidify the anti-Kremlin vote. They say internal polls show Bryukhanova commands twice as much support in the district, a claim Litvinovich dismisses.

With neither candidate willing to stand down, the race has turned ugly, and the arguments personal.

On social media, allies of Litvinovich have accused Bryukhanova — who was permitted to register even as the Central Electoral Commission rejected every other independent opposition candidacy in the country — of being a Kremlin-backed spoiler.

Meanwhile, popular blogger and key Bryukhanova backer Ilya Varlamov even accused Litvinovich of being complicit in murder, based on her opposition to a local road reconstruction project which he says will slow traffic and save lives.

“I don’t have a high opinion of Anastasia,” Litvinovich told The Moscow Times at a sparsely-attended meeting with local residents on a damp Thursday afternoon.

“I think that only people with experience and higher education should be deputies. Bryukhanova didn’t even finish university.”

Experts say the row will likely only result in a more resounding victory for the Kremlin-loyal candidate in the race.

But even though such squabbling looks set to simplify the Kremlin’s plan to secure yet another docile Duma, some oppositionists say that trying to bind Russia’s anti-Kremlin movement together after years of fratricidal bloodletting is futile.

“A liberal cannot agree with a nationalist or a communist — it is simply impossible.”