Speaking over crackling tannoys, officers explained the unprecedented move. Large crowds were undesirable during the pandemic, they said. The cosmonauts — that is how riot police are known colloquially — well, they were only there to ensure proper social distancing and mask wearing.

There was nothing subtle about the stance of authorities ahead of Sunday’s protests in support of jailed Kremlin critic Alexei Navalny.

Beginning early morning, police sliced off central Moscow from cars and pedestrians. A dozen metro stations were shuttered. Thousands of riot police were placed behind concentric rings of metal and barking dogs.

The massive police presence, of course, was there to serve another purpose: to warn people away from a repeat of last Saturday’s protest, when tens of thousands turned out to issue a very public warning to President Vladimir Putin. 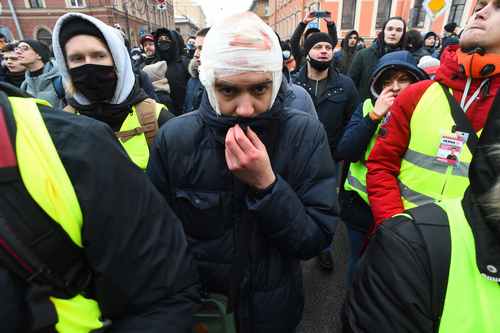 Blunt an instrument as it was, closing down Moscow’s city centre did appear to hand the Kremlin the advantage.

The lines of metal fencing meant Alexey Navalny’s team was forced at last minute to change the location of the rally. Moving the focus from Lubyanka, the headquarters of Russia’s security agency, to two nondescript metro stations immediately outside the police ring had the effect of turning the protest into a day of cat and mouse.

Protesters moved from one location to another, eventually heading towards the prison where Mr Navalny is being held in north-eastern Moscow. They were never able to congregate in the same overwhelming ways as last Saturday. The crowds were both more dispersed and less voluminous.

According to the Interior Ministry, just 2,000 turned out in the capital. Opposition groups put the number at tens of thousands. At the same time, the protests retained a resolutely national reach, with dozens of previously passive towns and cities across Russia uniting in protest against Vladimri Putin.

Some of the most violent clashes took place in St Petersburg, where turnout was much higher than in Moscow. There, police in the northern capital built on a reputation for brutality. Protesters were met with tear gas, and flying truncheons. One man had his head split open. Two others were reported unconscious.

Even in Moscow, the arrests were occasionally brutal, and the use of electric shock guns was reported. Police hunted in customary groups of threes and fours. Most of the time, the arrested did not appear to be committing any obvious offence. Sometimes they were marched to the vans politely enough. Other times, they were dragged by the scruff of their necks.

Many of the arrested were young. Some were crying as they were bundled into the waiting vans. Not all those doing the arresting were in uniform, one of several aspects of policing that appeared to be plucked out of the playbook of law enforcement next door in Belarus.

Yulia Navalnaya, wife of the opposition leader, was one of at least 4,000 bundled into vans nationwide — a number that is set to rise higher. According to Sergei Parkhomenko, a journalist who witnessed the arrest, Ms Navalnaya was first identified by a plainclothes officer before being accosted by riot police. Mr Parkhomenko would himself be arrested before the day was out, one of at least 82 journalists detained nationwide.

As the authorities appeared to gain the upper hand in Moscow, some of those demonstrating expressed frustration at “confusing” signals from Team Navalny. Maria, a public relations executive, surname withheld, said second steps didn’t appear to be well planned.

“With the odds stacked against us, we need to be playing a better game than this,” she told The Independent. “It isn’t enough to put messages up on social media and hope for the best.”

The Kremlin will hope today marks a turning point after two weeks of playing catch-up to their jailed nemesis.

This week, Vladimir Putin was forced to deny he owned an opulent luxury palace following a viral investigation video released by Mr Navalny from his prison cell. The video has already been watched more than 100 million times. On Saturday, Mr Putin’s close friend and childhood judo partner Arkady Rotenberg offered himself up as the owner of the building. He described it as an “apartment-hotel” complex.

Mr Navalny’s team, on the other hand, hope to build on the runaway success of the expose. They have already announced a follow-up protest for Tuesday — which is when the Kremlin is expected to condemn its most prominent critic to several years’ in jail.

Why Democrats’ climate goals may test their Latino appeal