Nicholas made landfall in Texas as a Category-1 hurricane in the early hours with warnings of heavy rain, high winds and dangerous tidal surge.

Tropical Storm Nicholas stalled over Texas on Tuesday, tipping a deluge of water onto an area battered by Hurricane Harvey in 2017, and leaving half-a-million people without power.

The storm moved slowly inland, dumping more than a foot of rain and bringing maximum winds of 40 mph south of the city of Houston. 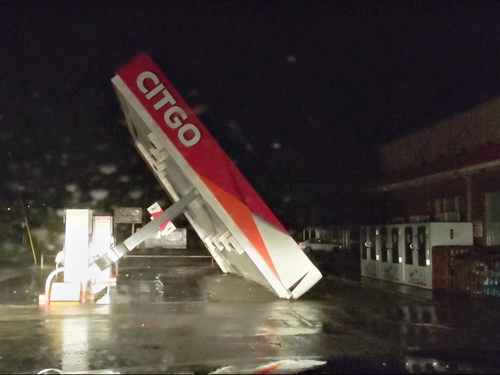 Category-4 Hurricane Harvey devastated Texas and Louisiana in August 2017 with widespread flooding. More than 100 people died in what was one of the costliest disasters on record.

“This city is very resilient. We know what we need to do. We know about preparing,” the mayor said.

Forecasters warned that Nicholas could bring life-threatening floods to Louisiana and parts of the Deep South in the coming days.

Nicholas made landfall early Tuesday on the Matagorda Peninsula on the southeastern Texas coast with winds of up to 75 mph (120 kph) but was soon downgraded to a tropical storm.

A number of schools closed along the Gulf due to the incoming storm. Multiple Covid-19 testing and vaccination facilities in the Houston and Corpus Christi areas were also shuttered.

Nicholas is the 14th named storm of the 2021 Atlantic hurricane season.

The climate crisis is creating conditions which are driving more powerful storms with greater rainfall.

While it’s unclear whether the climate crisis will mean an increased number of hurricanes in the future, scientists have long warned that increased global heating will likely make the storms that we do experience more destructive.

The ocean absorbs over 90 per cent of excess heat caused by greenhouse gas emissions – largely caused from the burning of fossil fuels – and that warm water feeds into hurricanes.

And as the planet heats up, more moisture is held in the atmosphere, meaning storms hold the potential of a lot more rainfall. Global sea level rise is compounding the danger of storm surge.

What is Labor Day and how did it start? The annual celebration explained