Minutes after news broke that presumptive Democratic nominee Joe Biden selected Senator Kamala Harris as his running mate for the 2020 US election, Donald Trump unleashed an attack ad aimed at his rivals.

The ad accuses Ms Harris of courting the “radical left” in her primary campaign by supporting Medicare For All, then accuses her of hypocrisy for running alongside Mr Biden despite chastising him about racist policy decisions he made earlier in his political career.

“Meet Phony Kamala Harris”, as the ad is called, goes on to suggest that Mr Biden isn’t a phony because he’s “not that smart”. It accuses Mr Biden of being a “transition candidate” who will “hand over the reigns” to Ms Harris and embrace the “radical left.”

Both Mr Biden and Ms Harris are largely despised by progressive-left Democrats, who overwhelmingly supported Senator Bernie Sanders in the primaries. Progressive Democrats have pointed to Ms Harris’s background as a California prosecutor and Mr Biden’s amplification of the drug war and other policies that disproportionately targeted people of colour as faults in their politics. 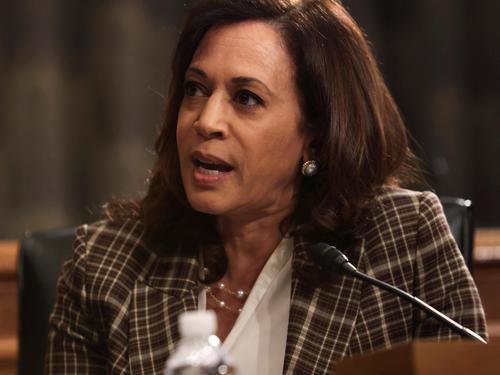 Backlash to the ad came swiftly from Mr Trump’s opponents on Twitter.

“This is what y’all were working on while Americans are dying? You’re pathetic,” Scott Dworkin, the co-founder of The Democratic Coalition tweeted in response to the video.

Another Twitter user, Ben Brewer, pointed out that earlier in July, Mr Trump said Ms Harris would “be a fine choice” for Mr Biden’s running mate during a press briefing.

Greg Sargent, who runs The Plum Line political blog on The Washington Post, said the ad was indicative of the Trump campaign’s inability to respond.

“They have zero idea how to respond. They’re attacking Biden-Harris for vowing to expand health care and repeal Trump’s massive deficit busting corporate tax cuts amid a pandemic, even as Trump has thrown the economy and the American people to the wolves,” he wrote. “He has nothing left.”

Though there were many detractors, others amplified the message and pointed to other instances of alleged hypocrisy on the part of Ms Harris.

One Twitter user shared a headline from a Huffington Post article which read “Kamala Harris on Joe Biden Accusers: ‘I Believe Them.’”

Another pointed out that targeting political opponents with ads during an election year was a normal practice.

“Yeah, because nobody has ever put out a sic ad targeting their opponent before,” the user wrote. “But yes, let’s get some fake camaraderie from people that do not like each other.”

Others pointed out the bizarre accusation that Ms Harris was in any way radical or leftist in her politics.

“Kamala Harris is as far from the “radical left” as a Democrat can get,” a user going by the handle @HKrassenstien wrote. “Just admit it, you are scared of Kamala Harris!”

Dave Klion, a writer for The New Republic with progressive-left political views, wished that the version of Ms Harris portrayed in the video was accurate.

“I would be excited to vote for the Kamala Harris depicted in this video,” he wrote.

As of 5:30 p.m., the video had nearly 2 million views after being online for less than an hour.