After Donald Trump was cancelled by Twitter and Parler was erased from the internet, a mass exodus of the digital homeless began migrating to the self-described “free speech social network” called Gab.

On 9 January, Gab tweeted the site was gaining more than 10,000 users an hour and received 12 million visits in 12 hours following the suspension of Mr Trump’s Twitter account.

“Gab gained more users in the past two days than we did in our first two years of existing,” the company said in a now-deleted tweet. “In very short order Gab will be bigger than the entire legacy media combined.”

Gab was launched by “Christian technology entrepreneur” Andrew Torba following what he says was the rise of big tech censorship during the 2016 election, according to the company’s website.

“I didn’t set out to build a ‘conservative social network’ by any means. But I felt that it was time for a conservative leader to step up and to provide a forum where anybody can come and speak freely without fear of censorship,” Mr Torba told The Washington Post in 2016.

Gab rose to infamy following a massacre in Pittsburgh when it was discovered the shooter posted anti-Semitic comments on the platform shortly before allegedly killing 11 people at the Tree of Life synagogue.

“I can’t sit by and watch my people get slaughtered. Screw your optics, I’m going in,” he wrote. 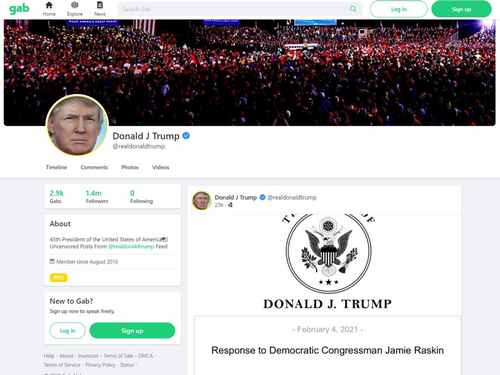 The company condemned the attack and suspended the account.

Following the shooting, however, PayPal cancelled Gab’s account and it was dropped by original domain host, Go Daddy. Google removed it from the Play Store over its hate-speech policy, while Apple blocked the app over pornographic content.

All told, Gab says it has survived multiple attempts of de-platforming off the internet, including the banning from more than 25 service providers, app stores and payment processors.

While Parler was crippled by the denial of services, Gab remained online by building out an “alternative internet”, including hosting infrastructure and web browsing, in a model that Parler is expected to follow.

As Silicon Valley increased its removal of controversial accounts throughout 2020, Gab welcomed them with open arms. After Facebook purged Qanon accounts, Mr Torba published a blog post welcoming followers of the conspiracy theory to its platforms.

“Gab is happy to announce that we will be welcoming all QAnon accounts across our social network, news, and encrypted chat platforms,” Mr Torba wrote.

“Members of the QAnon community have been active on Gab for several years. We have never seen any calls for violence, threats, or any other illegal activity from this group of people,” he added.

As a result, platforms that prioritize free speech like Gab, as well as Parler, are most frequently pointed to as breeding grounds for extremism that leads to violence.

“If you took Parler out of the equation, you would still almost certainly have what happened at the Capitol,” chief executive Angelo Carusone told Salon.

“If you took Facebook out of the equation before that, you would not. To me, when Apple and Google sent their letter to Parler, I was a little bit confused why Facebook didn’t get one.”

Speaking to Forbes following the Capitol riot, Mr Torba said Gab did a “phenomenal job” of mitigating violent content in the weeks before the attack, which he says was organized using “Facebook’s technology”.

“We’ve been removing this stuff for weeks and weeks, working 18 to 20 hours a day to make sure no illegal activity, no threats of violence are happening on Gab,” Mr Torba said.

“I can send you several violent posts that are still on Twitter,” he added when asked about posts that remained on Gab while appearing to violate its policies.

From a product perspective, Gab is a mash-up living somewhere between Twitter and Facebook, with trending posts, aggregated news and explore sections. 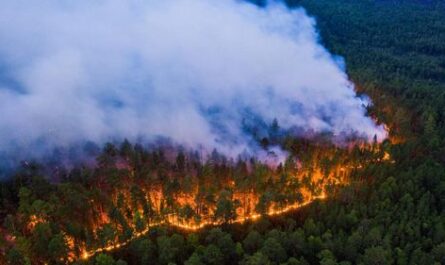 Why wildfires are everyones problem Women may have ruled in bronze-age Spain, burial site suggests