It was a particularly cold June morning in northern Kenya when rangers working in Loisaba Nature Conservancy first spotted a large male elephant limping near a watering hole.

The rangers began monitoring the elephant, a large bull with enormous tusks, who was nicknamed Alan.

Max Silvester, a Conservation Volunteer in Loisaba, said; “the injury was likely the result of a botched poaching attempt. Alan had some of the biggest ivory I have seen.

“After 24 hours when the bull’s discomfort was not subsiding, a Kenya Wildlife Service KWS vet was brought in to examine him. No mean feat!”

A wounded animal is liable to attack anything that comes close to it, and the elephant charged at the team who assembled to help him. “I was very afraid because he was huge,” said Loisaba’s Security Assistant Rita Orahle, who assisted KWS vet Dr Dominic Mijele.

“He was trying to scare us by trumpeting because he knew he could not run away due to his injury”, said Dr Mijele. “I darted him and it became obvious that the wound was caused by a bullet which had entered the animal’s right foot, having first grazed the trunk. 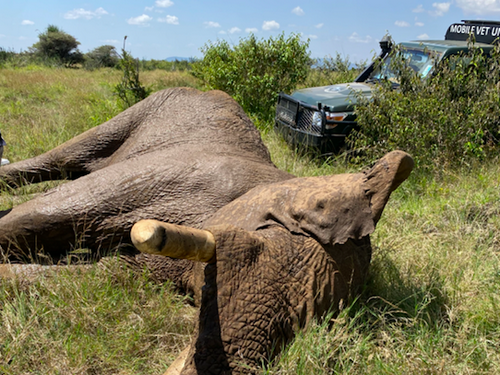 “After cleaning the injury and administering antibiotics I gave him an antidote and he walked off. If the elephant had been left untreated he would have been dead within a week.”

All hunting is illegal in Kenya, a nation that has led the war against the plundering of wildlife, and ivory trafficking in particular.

The Independent’s Stop The Illegal Wildlife Trade campaign was launched to call for an international effort to clamp down on poaching and the illegal trade of wild animals.

Funds raised will to pay for vital wildlife protection projects implemented by the campaign’s partner charity Space for Giants. This will work to help stop the poaching and illegal trafficking of animals.

The Covid-19 conservation crisis has shown the urgency of The Independent’s Stop the Illegal Wildlife Trade campaign, which seeks an international effort to clamp down on illegal trade of wild animals

Through more effective anti-poaching operations and supporting more effective legal action against wildlife criminals, Space for Giants has helped to bring about a 90% poaching reduction where it operates in northern Kenya.

However the impact of Covid-19 means help is urgently needed to protect elephants against an increased threat of slaughter.

In 2015 Space for Giants worked with international conservation organisation The Nature Conservancy to establish Loisaba as a conservation trust in perpetuity, protecting a critical habitat for a diversity of endangered species.

Covering an area of 57,000 acres in the county of Laikipia, Loisaba has an increasing resident population of elephants, estimated at around 800, as well as an abundance of other fauna, including more than 260 bird species and 57 mammals, such as lions, leopards and cheetahs.

Space for Giants supports wildlife monitoring, security and conservancy management in Loisaba, financed by The Nature Conservancy and other donors, including San Diego Zoo.

The communities around Loisaba understand the value of wildlife, and the happy result is the conservancy is a zero poaching zone – a fact that even pachyderms themselves might understand.

Silvester told The Independent “it’s likely that Alan the elephant was shot elsewhere, but the intelligence of this bull, in moving quickly to a place of safety Loisaba Conservancy, allowed the rangers and the vet team to assure his wound was treated quickly and successfully.

“He continues to roam Laikipia as a testament to his forefathers, the huge tuskers before him.“

Orahle adds “the rangers continued to monitor the bull, and he was last spotted in early August looking happy and not limping at all.”

Alan was not the only animal to be rescued in Loisaba that day. The ranger team rushed off to treat a giraffe with a split hoof.

In the midst of a raging global pandemic Loisaba’s wildlife operations continue to protect endangered species, preserving biodiversity and supporting local communities in the process.