Donald Trump praised supporters on Thursday as “incredible people” for defying the state’s “shutdown” orders and social distancing guidelines while gathered for a campaign rally in Pennsylvania, a key swing state he boldly predicted he will win come Election Day.

“Based on the crowd outside it looks to me like we’re going to win this thing,” the president said near Scranton, eliciting a round of loud cheers and whistles.

“I think, by the way, by a lot. But your governor has you in a shutdown. Like, what’s going on?” he said of Democratic Governor Tom Wolf.

“How did they all get out there?” Mr Trump asked, pointing off stage to his left, in the direction of supporters who had gathered for his rally speech outside the venue in the town of Old Forge. “And they were not socially distanced, I can tell you. We’ll have to – on the way back, they’ll still be there. Because they’re incredible people.”

As the president continues his counter-programming tour of official events and campaign rallies in swing states such as Arizona, Pennsylvania, and Minnesota, he and his backers have grown increasingly cavalier about observing health guidelines such as wearing masks and socially distancing – though cameras did catch some of the Thursday attendees with masks over their noses and mouths.

At a rally at the Yuma International Airport in Yuma, Arizona on Wednesday, the president spoke before a crowd of tightly packed supporters, many of whom were wearing his signature red “Make America Great Again” hat – but not masks. 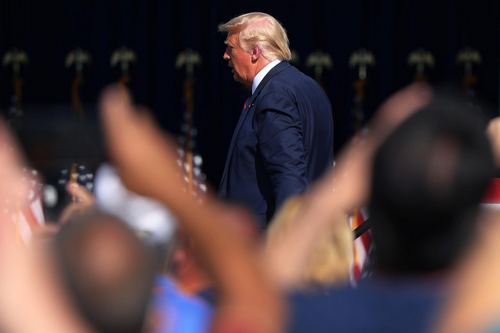 Mr Trump doubled down on his oft-repeated notion that if he loses key swing states, it will only be because of election fraud. Voting rights groups, Democrats, and several Republicans have dismissed, calling it baseless and fundamentally anti-democratic.

“How are we doing in Pennsylvania – OK?” the president asked his Pennsylvania campaign chairwoman, Bernadette Comfort.

“I think so, I think so. If we don’t win, they did a lot of manipulation,” Mr Trump said without providing a shred of evidence of any nefarious effort to alter the outcome there on 3 November .

Democratic presidential nominee Joe Biden is beating the president by 5.7 percentage points in an average of several recent polls in the Keystone State, according to RealClearPolitics.

Over the course of the summer, the president has opposed expanding mail-in voting by spreading falsehoods about the prevalence of fraud in the process, even though confirmed cases of voter fraud nationwide have been in the single digits in past presidential elections.

He has spent countless hours on Twitter and before reporters during his political career promoting unsubstantiated theories about rampant voter fraud in the US, which study after study has shown is extremely rare. The president has repeatedly claimed, falsely, that he would have beaten Hillary Clinton in the 2016 popular vote were it not for the “millions of people who voted illegally.”

Mr Trump’s own advisory commission on election integrity spent eight months, from May 2017 to January 2018, probing claims of voter fraud but did not turn up a single confirmed instance.

A Washington Post review of data from after the 2016 election found just four confirmed cases of voter fraud: three people who tried to vote for Mr Trump twice – and were caught – and an election worker in Miami who was caught trying to fill in a bubble on someone else’s ballot for a local mayoral candidate.