Donald Trump gave a 15 September deadline for Microsoft or another “very American” company to buy TikTok – or else the popular video app will shut down in the US.

But the president also suggested that the US should receive a “substantial portion” of money in an acquisition deal because the US is ”making it possible for this deal to happen”, he said.

A deal must be arranged by mid-September when the Chinese app will be “out of business” in the US, he said.

“It can’t be controlled for security reasons by China,” the president said at the White House on Monday. “Too big, too invasive. … My personal opinion was you’re probably better off buying the whole thing rather than 30 per cent of it.”

He argued that because the purchase would send money into China, the US should receive money in return, though it’s unclear how such an arrangement would work.

Administration officials and both Republican and Democrat lawmakers have argued that the app poses a national security threat by allegedly collecting user data and sharing it with China’s government. 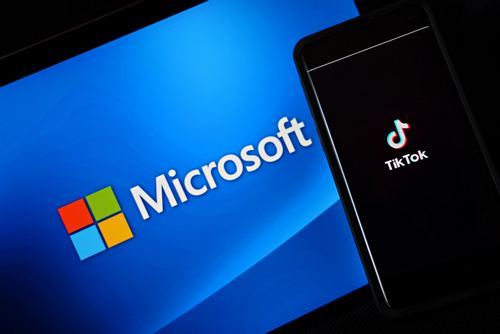 On Sunday, secretary of state Mike Pompeo told Fox News that the administration is targeting a ”broad array of national security risks that are presented by software connected” to China following the president’s threat on 31 July to “ban” the app.

The company has denied the accusations, stressing that its user data is stored in the US “with strict control on employee access” and is not controlled directly by Bytedance, its parent company in Beijing.

“We are committed to protecting our users’ privacy and safety as we continue working to bring joy to families and meaningful careers to those who create on our platform,” the company said in a statement.

In a statement on Sunday, Microsoft announced that the company “will move quickly to pursue discussions with TikTok’s parent company, ByteDance, in a matter of weeks, and in any event completing these discussions no later” than 15 September.

Microsoft said it “would ensure that all private data of TikTok’s American users is transferred to and remains” in the US and that any data that is ”currently stored or backed-up” outside the country Microsoft would be deleted from servers after the transfer.

US Treasury secretary Steven Mnuchin also said on Sunday that the US Committee on Foreign Investment, which the secretary chairs, is reviewing the app, which counts roughly 80 million monthly users.

“I will say publicly that the entire committee agrees that TikTok cannot stay in the current format because it risks sending back information on 100 million Americans,” he told ABC. “It cannot exist as it does.”

The allegations against the company and the administration’s combative response have underscored US-China tensions, which in recent weeks have heightened with the closure of China’s consulate in Houston following spying accusations, sanctions against high-ranking Chinese officials, and a June speech in which Mr Pompeo appeared to urge Chinese people to unseat their government.

China has also ordered the closure of a US consulate in Chengdu. Why Is Russia Not Using Pegasus Spyware?