It’s not surprising that a certain segment of the Russian public responded so energetically to the poisoning and imprisonment of opposition politician Alexei Navalny, taking to the streets for mass protests two weekends in a row before his team changed tactics.

Yet in the end, the protests were less about Navalny than about mounting socioeconomic problems and the frustration of younger Russians and the urban middle classes, who have been squeezed by economic stagnation since 2014.

The more interesting question is whether Navalny’s team can capitalize on this growing unhappiness, or whether the authorities can channel it in less threatening directions.

The strategy of the regime so far has been to react with typical brutality, just like during the last big demonstrations in the summer of 2019 — though nowhere near the level of what happened in neighboring Belarus last summer.

The authorities also are making the argument that Navalny is not an anti-corruption crusader, but the leader of a foreign-sponsored revolution. This may sound preposterous, but it will resonate with certain segments of the public.

This crackdown is the authorities’ way of communicating to anyone who is taking to the streets that they will be forced to pay a price and that this price is increasing. The authorities are saying, “So you want a Ukrainian-style revolution of dignity? Then first you should be ready to go through certain humiliation.” That’s why judges are handing down harsh sentences simply for sharing items on social media and locking up urban middle-class protesters in squalid camps originally set up for illegal migrants for two or three weeks at a time. 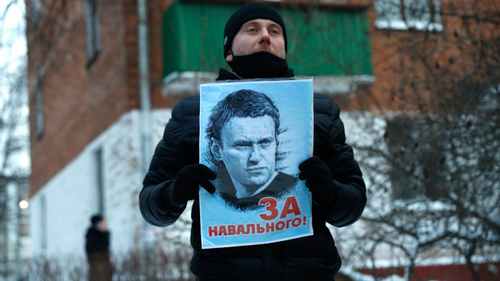 The idea of dignity as a trigger for political protest in Russia is complicated in Navalny’s case by the fact that for Russians, dignity has long been expressed in the form of resistance to the West.

Such resistance is more embodied by President Vladimir Putin than by Navalny, especially now that the government is portraying him as a tool of the West.

The authorities are fairly skilful at using these heavy-handed tactics because they know how they impact on people’s behavior, especially at a moment when most Russians are rather apathetic and depoliticized. When the government makes it clear that it’s prepared to use violence against peaceful protesters and to lock them up for extended periods, it plays on a preexisting mindset that perhaps protesting is not going to lead to any actual changes in society.

The Kremlin is banking on that reaction, and wants to foster public expectations that any protest movement will exhaust itself, just like the many previous movements, and that the regime will stay standing. Even people who are unhappy will opt for what looks to them like perfectly rational behavior, and stay out of politics.

While outside of Russia, there are widespread assumptions that Navalny is being embraced at home as the leader of the Russian opposition, the polling data available so far tell a different story. Navalny’s level of support hasn’t changed: only about 20 percent of the population is sympathetic toward him. It appears that Navalny may have overestimated the readiness of ordinary people to support him.

Just like Putin, Navalny may live in an information bubble.

He and his team are brilliant at generating media attention, viral content, and huge numbers of viewers of his anti-corruption videos. But this popularity may not necessarily translate into active support offline. The reasons for this are numerous. There is huge inertia within Russian society. Most people sense that the regime is not, in fact, on the verge of collapse, and that mass street protests are unlikely to facilitate or accelerate the end of the Putin era.

Navalny is very successful at reaching out to and inspiring young Russians. But Russia’s population is ageing, and the youth segment is pretty small. Navalny doesn’t have much of a track record of attracting support from the majority of the voting-age population, which consists of people of middle and advanced age.

The wounds of perestroika and the 1990s are far from healed, and many of those people remember how a campaign led by Russian anti-Communists and liberals for social justice and freedom against the Soviet nomenklatura was followed by ordinary people losing their jobs — and the country as they knew it.

Another factor working against Navalny right now is that the Russian government steered most of its COVID relief to its core electorate, not to the kind of people who came out onto the streets in support of Navalny. For Putin’s supporters, the paternal embrace of the Russian state is still very desirable.

After all, the Russian authorities did not impose multiple strict lockdowns, avoided the collapse of the health care system (such as it is), and created an effective vaccine. Against this background, the usual message of the Russian opposition—“let’s change our ways and live like people in the West” — is less convincing than usual.

None of this is to say that the Kremlin isn’t afraid of Navalny or that it won’t try as hard as it can to discourage his potential supporters. It will. The Kremlin is all too aware that the electoral behavior of the silent majority in countries like Russia can be unpredictable. Russia’s biggest political event in 2021 is the Duma elections in September. Despite all of its tools and tricks, the Kremlin sometimes can be taken by surprise by the results of protest voting.

Navalny is reaching more people than the classical liberal electorate that’s nostalgic for the ’90s. The pro-Western liberal intelligentsia might have cut itself off from supporters of the nationalist politician Vladimir Zhirinovsky, for example, but there’s nothing stopping Navalny’s followers from joining forces with them — especially in the regions.

Navalny’s team understands perfectly well that as things stand, they cannot beat Putin in elections. That may be part of the reason why they have said that they will switch from street protests to diplomatic efforts to release Navalny. There are signs that this goal is more ambitious than advertised, and that those diplomatic efforts won’t be limited to Navalny’s release.

Ultimately, what Navalny’s team is trying to do is persuade Russians and foreigners alike that he is the only legitimate opponent of Putin and that his success is the best guarantee of the future democratization of Russia. Under this logic, the transfer of power to any other person except Navalny would not be enough.

It’s too early to say, however, whether all of Russian civil society is prepared to throw its support behind that suggestion.